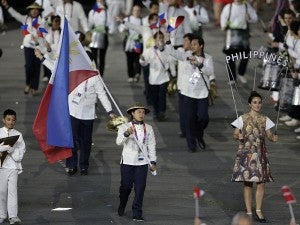 Team Philippines during the Parade of Nations AP PHOTO

From London to Bangkok, the world is learning—and experiencing—why it’s “more fun in the Philippines.”

Spreading the Filipino brand around the globe, Philippine embassies and consulates are getting the word out about the country’s new tourism slogan.

Just after the London Olympics opened on July 27, the Philippine Embassy in the British capital hosted a reception for Irish students who cheered for the Philippine Olympic team as part of the Olympic Guard of Honor.

The embassy hosted students from Dundonald Primary School and Orangefield High School in Belfast, Northern Ireland, in a reception that gave them a taste of what the Philippines is all about through food, cultural performances and handicraft.

“We congratulate all of you and your schools for having been chosen as part of the prestigious Olympic Guard of Honor and we truly appreciate all the support you have given to Team Philippines,” Philippine Ambassador to the United Kingdom Enrique Manalo told the group at a reception on July 28.

The students are part of some 2,000 Britons from 250 schools around the United Kingdom who cheered as they lined up along the athletes’ route from the Olympic Park to the Olympic Stadium during the opening ceremonies last week.

They were chosen through London 2012’s education program Get Set Network for showing the “commitment to living the Olympic and Paralympic values and incorporating them into their school lives and curriculum,” the embassy said in a statement.

The embassy said the Irish students handcrafted Philippine flags and other symbols to cheer for the Filipino Olympic team.

“The boys and girls heartily waved their banners and personally greeted the Philippine Olympic Team as the latter made their way to the stadium for the opening ceremonies,” said the Department of Foreign Affairs in a statement.

At the embassy reception, the Irish guests partook of a spread of Filipino delicacies and were handed tokens of Filipino handicraft.

They were also entertained with a cultural show, with London-based Filipinos performing dances from across the country. The performance ended with Irish teachers literally dipping their feet in a “tinikling.”

Irish school officials said the students enjoyed their visit and are planning on “setting up links with a school in the Philippines.”

Earlier that week, the Bicol Tourism, Trade and Investment Mission flew to Los Angeles to discuss Bicol tourism and business prospects with the Filipino community and local media.

In Bangkok, Philippine embassy officials took part in an exhibit of the Thai Ministry of Commerce-Department of Foreign Trade’s Asean Economic Community Pavilion from July 26 to 28.

Read Next
A first: Philippines to buy 2 missile warships from Italy—DND
EDITORS' PICK
PH preps for China virus: Question of when, not if
Museums ‘put to sleep,’ churches closed amid volcano’s unrest
Beyond water service: Maynilad builds massive infrastructure projects to clean up Metro Manila waterways
Get exciting deals and discounts when you download the new McDonald’s App
Seventh judge assigned to handle De Lima case
SM continues to send relief assistance to remote towns in Batangas
MOST READ
Passengers from Wuhan, China to be flown out of Kalibo, Aklan – CAAP
Part of Aurora Boulevard in Cubao closed from Jan. 25 – Feb. 1
Lacson on Duterte’s threat to end VFA over Bato’s canceled visa: Where is the connection?
Seventh judge assigned to handle De Lima case
Don't miss out on the latest news and information.