Insensitive treatment of Filipino veterans at US hearing 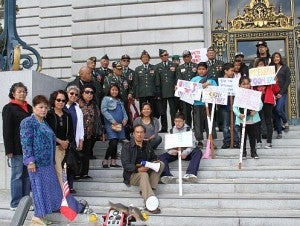 SAN FRANCISICO – Wearing their crisp dark green uniforms and bemedaled military caps, WWII Veterans were early at the steps of City Hall, ready to be witnesses to the third hearing of the matters concerning the War Memorial Veterans Building (VMVB) before the Historic Preservation Commission. Along with members of the American Legion and other veterans groups, they came as expected on time for the 11:30 a.m. hearing although the proceedings actually started closer to noon. That day’s hearing included several other items on the agenda along with the Veterans issue, which was Item #14. It was past 1:30 p.m. when the president of the commission, Charles E. Chase called for a five-minute recess and said that Item #14 (the Veterans Issue) will be first on the agenda after the recess.

The five-minute recess announcement did not give anyone attending any chance to grab food. None whatsoever for the aging veterans whose average age was 90 years old. The commission got back to the hearing room some 30 or so minutes later at 2 p.m. One can only surmise they made provisions for themselves. The veterans sat patiently in their seats, unable to get anything to eat.

When the hearing started, Mr. Chase announced that, contrary to his prior announcement, Item #15 would be discussed before Item #14 due to some unfathomable excuse that the mayor needed the resolution immediately. And to the further dismay of those who had been waiting for some three hours straight, Mr. Chase also announced that he had approved the request of the representative of the Performing Arts Commission to give Major General J. Michael Myatt, USMC (Ret.) some special accommodation to speak first on behalf of the Board of Trustees of the WMVB regarding Item #14, prior to discussing Item #15, “because he had some important meeting to attend”. He couldn’t be made to wait after Item #15’s deliberations along with the aging veterans.

And so the motley group of Veterans sat and waited stoically, only occasionally shaking their heads in objection to some of the general’s statements. General Myatt presented himself as a military man, speaking at length about his military background. Ironically, he along with the Board of Trustees, had now aligned himself with the Performing Arts Commission because he found the requests and counter proposals of the Veterans “unreasonable.” He also said that, after all “there are going to be less and less veterans in the future. Last year, there were 40% less veterans.”

It’s almost unbelievable that the major general even belittled his own military worth. So, shall we also forget the martyrdom of those who’ve sacrificed their lives for their country? Call the War Memorial – Performing Arts Center of San Francisco instead.

It took another hour before all the recitals and resolutions were made for Item #15 when Mr. Chase with some relief proclaimed that “Finally, the item we’ve all been waiting for,” looking pleased with himself as he gazed at the forty plus folks waiting for their turn to be heard. But the good Mr. Chase was not done with the Veterans. He had another bomb to explode. He added, “But it’s now 3:30 p.m. we only have up to 4:30 p.m. for the use of this hall.”

What is in Item #14 that the Commission almost did not wish to hear?

Item #14 is about the retrofitting, repair and renovation of the outer and inner structure of the WMVB; California Historic Preservation Landmark #84 and birthplace of the United Nations. The Board of Trustees along with the Performing Arts Commission want to appropriate the historic rooms of the American Legion and other Veterans groups including the LGBT Veterans and the Bataan Post 600 located on the ground floor of the WMVB. The Veterans were fighting for what is due them- reclaiming their respective rooms after the repair and renovation of the building. But if the Trustees and PAC’s plan pan out, the rooms will be converted to social functions, performance and rehearsal spaces for the arts, and the Veterans transplanted to the upper floors or unseen in some forsaken building somewhere in the City, their heroism forgotten and the memory of their fallen comrades dishonored.

During these public hearings, anyone can speak up for or against the agenda item on hand. There were 25 who signed up to speak. Each was given only two minutes and nothing more. On the previous Items since the hearing started, there were at the most two or three who spoke up. Here there were 25 signed up to speak out and, at two minutes each plus discussions among the commissioners, 4:30 p.m. was really cutting it close.

By that time, only seven of the nine Veterans had survived the prolonged hearing delay. Two senior members, who were the more knowledgeable and articulate, had to leave for medical reasons.

Rudy Asercion, Commander of Bataan Post 600 wrote Mr. Chase, “While moving items within the agenda is a common practice, one finds it extremely strange that these seniors, who wore their uniforms with pride, were not given any respectful treatment or accorded any consideration in view of their physical condition.

Whatever happened to the spirit of respecting our elders? While it was certainly your prerogative to rearrange the agenda items the way you see fit, shouldn’t the seniors ability to sit for such prolong period of time merit some considerations?”

“The City and County of San Francisco has a proud tradition as a shining star of how she treats her citizens no matter their views. The City certainly will not be viewed favorably if senior citizens are not treated with sensitivity and respect as in this case.”

That was putting it mildly. In truth, it was a disgrace.

Next (The Commission’s saving grace – Mr. Allan Martinez, and Long Drawn Out War at WMVB Goes Room to Room)