In Colorado tragedy, a Filipino American was a real life Batman 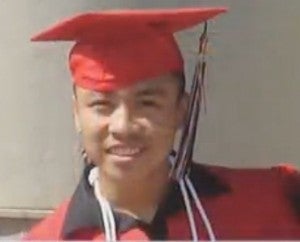 SAN FRANCISCO — It was supposed to be a fun evening with friends at the local cinema.

Ryan Lumba and his buddies were there to enjoy a much-awaited movie about a famous superhero known for defending the weak and saving the powerless.

Instead, they found themselves in a middle of a tragedy. And Filipino American Ryan Lumba became a real life Batman.

The teenager was one of the 58 people injured in the massacre in which 12 people were murdered by crazed gunman.

He is reportedly in stable condition which is good news. I hope he recovers fully soon. We would all want to hear his version of what happened.

We already know the general outline of the tragedy: a young man with a mini arsenal opens fire inside a theater showing the Batman blockbuster, The Dark Knight Rises.

But there are the other subplots. One of the most compelling involves the Filipino American teenager.

For in the seconds after James Holmes began shooting in the theater, Ryan made a call that not everyone would probably make.

And because of that call, his friend Devon Suits is alive, having survived the massacre uninjured.

Because of that call, Devon Suits will move on next month to start a new life as a freshman at a local university to play college football on scholarship, according to Denver Post columnist Woody Paige.

“I’m alive. My best friend since fourth grade, Ryan, and God saved my life, so I’m going to cherish every day. That’s enough for me,” Suits told the Denver Post.

Many of us would want to know: what moved a young man to make such a call amid so much confusion? Where did he get such strength?

As Devon Suits recalled in the Denver Post story, “That was the tear gas (canisters.) My eyes began burning. There was smoke, and the flashes and bullets flying, screaming, and it was surreal. Everybody was freaking out. I didn’t even know that the movie kept playing. I thought there were two gunmen — the one throwing the gas and the other shooting. I lost it. I just sat there not knowing what to do. I’ve played hundreds of (action) video games, and this was no comparison. There was a gunfight early in the movie, but the real noise was a lot louder and the flashes so much brighter.”

In the middle of such scary chaos, young Ryan Lumba made the critical decision.

“Ryan grabbed me and threw me down under the seat,” Devon Suits recalled in the Denver Post story. “That saved me. I could look through the crack between the seats at someone in glasses with flashes going off. Then I felt like somebody punched me really, really hard in the left arm, and there was blood. At the same time, Ryan screamed.”

What went through Ryan Lumba’s mind? Did he even have time to process what was going on?

Others would probably have processed the rapidly unfolding event differently, focusing mainly on how one can save oneself.

But not Ryan Lumba.

The thought-process probably went like this: ‘My friend is in danger. I must do something to save him.’

Maybe he didn’t have time for such thoughts. It was all instinct. The instinct of a hero.

He quickly sensed the danger to his friend — and he moved to save him without thinking about his own safety.

Something Batman probably would have done. Although citing a comic book character or some Hollywood blockbuster fantasy does not really do justice to Ryan Lumba’s heroism.

For Ryan didn’t need a cape and mask, a fancy car, a mysterious hiding place, or an intriguing name to save a life.

He just did it. In a split second, he knew what had to be done.

He is recovering. But his family is still reeling for yet another difficult experience. His mother Remy recently underwent a mastectomy that saved her life, and his father Sam just suffered a heart attack.

The Colorado chapter of the National Federation of Filipino American Associations has launched a campaign to raise funds for the family. For more information, check out the NAFFAA Web site here.