Aquino: Philippines won’t back down from feud with China 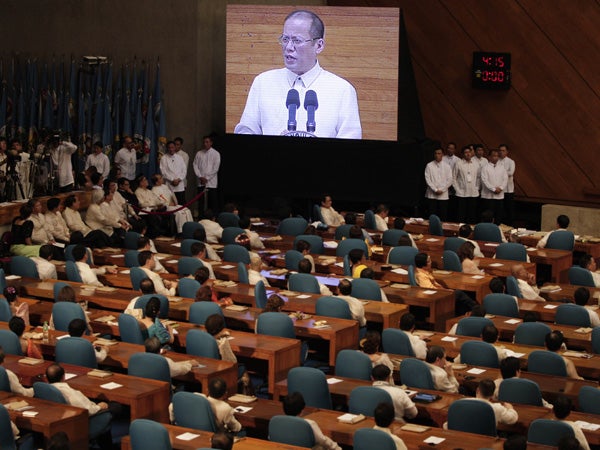 President Benigno Aquino is projected on a large screen as he delivers his State of the Nation address during the 15th Congress at the House of Representatives Monday. AP

MANILA, Philippines—President Benigno Aquino III said Monday that his Southeast Asian nation won’t back down from a West Philippine Sea (South China Sea) territorial dispute with China and that he would better equip his country’s military for maritime defense.

Aquino announced during his annual state of the nation address that more than 40 military aircraft — from two newly refurbished C-130 cargo planes to attack helicopters — along with other weapons would be delivered in the next two years to bolster Philippine military muscle amid renewed territorial conflicts in the West Philippine Sea.

But Aquino stressed that the Philippines was aiming to forge a peaceful solution that would be acceptable to China.

A standoff erupted in April between Chinese and Philippine ships at the Scarborough Shoal, which both countries claim. China calls the shoal Huangyan Island while Manila identifies it as Bajo de Masinloc. Aquino withdrew his country’s ships from the contested area last month as tensions with Beijing escalated, but Chinese government ships have stayed put.

Some lawmakers have suggested that the Aquino administration tone down its rhetoric and instead quietly negotiate a compromise with Asian superpower China. A Philippine senator has described the lopsided feud as a clash between a “mosquito” and “a dragon.”

“There are those who say that we should let Bajo de Masinloc go. We should avoid the trouble,” Aquino said in his nationally televised speech before Congress. “But if someone entered your yard and told you he owned it, would you agree? Would it be right to give away that which is rightfully ours?”

“I do not think it excessive to ask that our rights be respected, just as we respect their rights as a fellow nation in a world we need to share,” Aquino said, referring to China.

Aside from China and the Philippines, four other countries — Taiwan, Malaysia, Vietnam and Brunei — have conflicting claims in the West Philippine Sea. Many fear the resource-rich and busy waters could spark Asia’s next major armed conflict.

About 6,000 police officers were deployed to secure the House of Representatives, where Aquino spoke, and nearby roads. Several were injured when riot police clashed with thousands of left-wing and trade union protesters, who were seeking higher wages, land reform and a stop to alleged human rights violations.