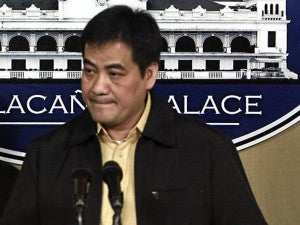 MANILA, Philippines – President Benigno Aquino III will not give up the disputed Bajo de Masinloc, internationally known as Scarborough Shoal.

Presidential Spokesman Edwin Lacierda told reporters in an ambush interview after Aquino’s State of the Nation Address (SONA) that the President could face impeachment if he gives up the shoal which is being claimed by China.

“We cannot cede [Bajo de Masinloc] because that is ours. It would be an impeachable offense if the President would cede any part of our territory,” Lacierda said.

“[The shoal] is very clearly ours and within our Exclusive Economic Zone,” Lacierda said. “It is very clear in the international laws that Scarborough or Bajo de Masinloc is part and parcel of the Philippines.”

Aquino said in his hour and a half long speech that “hindi naman po yata tamang ipamigay na lang natin sa iba ang sadyang atin talaga (It is not right that we will give away to others what is rightfully ours).”

He said in his speech that they are already talking with experts and other heads of states, including representatives of China, in order to find a solution that is amenable to all parties.

When asked to comment on the perception that the government’s position against China was weak, he said “it’s not that we are weak against China, but I think everybody agrees, including China agrees, that the best solution is (through) peaceful and diplomatic (means).”

Aquino called for the Filipinos to unite on the issue. “Help me relay to the other side the logic of our stand,” Aquino said in his speech.

Bajo de Masinloc has been the subject of a territorial dispute between the Philippines and China for several months since Chinese fishermen were found poaching in the shoal.

China claims the entire West Philippine Sea as part of its territory while several other Southeast Asian countries claim sections.

Read Next
China plans garrison to ‘defend’ disputed islands
EDITORS' PICK
‘Opportunity’: PH senior population on the rise
Powered by style, innovation and passion
House starts inquiry into sugar import mess
Pimentel: Gov’t buyers knew of cheaper laptops but still got expensive ones
A laptop that maximizes your WiFi so you can maximize your productivity
House energy committee chair Arroyo bats for cheap electricity
MOST READ
Imee Marcos bares illegal importation of white onions
Pimentel: PS-DBM knew of cheaper laptops but still got expensive ones
U.S. actor Anne Heche is taken off life support 9 days after car crash and dies
Is appointment of Comelec chair constitutional?
Don't miss out on the latest news and information.