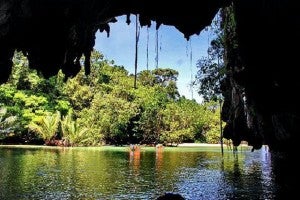 MANILA, Philippines—When it rains, it pours for the Puerto Princesa Underground River (PPUR).

Barely four months after having been officially installed as one of the world’s New 7 Wonders of Nature in April, the underground river was declared “Wetland of International Importance” during the Ramsar Convention held on July 6-13 in Bucharest, Romania.

The PPUR is the longest navigable under river in the world, flowing 8.2 kilometers through a cathedral-like cave of limestone formations, stalactites and stalagmites. A natural World Heritage site and Puerto Princesa City’s premier eco-tourism destination, it was also recorded in the Unesco World Heritage site list for its outstanding value and ecological significance.

“Once again, it has been proven that caring for the environment is the right way to go. It shows that we were on the right track to commit our leadership to the policy environmental protection and sustainable development,” Puerto Princesa Mayor Edward S. Hagedorn said in a press statement.

Wetlands are areas saturated by water. They support various types of vegetation with the ability to survive in saturated soil conditions. The ecological benefits that can be gained from wetlands spring from its basic function which is to conserve and preserve water.

Environment Secretary Ramon Paje enjoined all Filipinos to “take pride for taking the lead in the global effort to protect wetland areas not only for the economic benefits they provide but also for the ecological service we are now enjoying.”

It was Paje who pushed for PPUR’s nomination to the list of Ramsar Convention of Wetlands, for its importance as a biodiversity conservation covering the entire mountain-to-sea ecosystem and its forests.

Governments worldwide recognized the importance of wetlands in the environment, Hagedorn said. On Feb. 2, 1971, 18 nations adopted the Ramsar Convention on Wetlands of International Importance in the city of Ramsar in Iran, due to the alarming rate of destruction of wetlands. Today, there are currently 160 contracting parties who form the nucleus of Ramsar convention, including the Philippines, who regularly meet every three years for a conference of parties.

The Ramsar Convention provides the framework for national action and international cooperation for the conservation and wise use of wetlands and their resources among member parties. Parties are obliged to designate and nominate one wetland site for inclusion in the “List of Wetlands of International Importance,” following certain criteria.