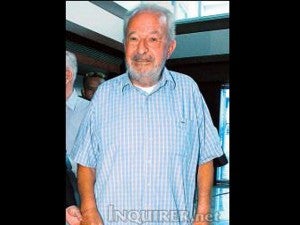 Irish priest Michael Sinnott after he was freed by his Abu Sayyaf kidnappers in November 2009. He is returning to retire in his native Ireland on Friday, July 20, 2012, after spending 58 years as a missionary in southern Mindanao. INQUIRER PHOTO

MANILA, Philippines—Irish missionary priest Michael Sinnott, who survived being a captive of the Abu Sayyaf, is finally saying goodbye to the Philippines.

The 80-year-old priest is leaving for his home country on Friday, where he will officially retire, according to the official news service of the Catholic Bishops’ Conference of the Philippines, CBCPNews.

At the send-off party held at the Malate Church on Tuesday night, Sinnott admitted that he had a difficult time deciding whether to retire here in the Philippines or in Ireland.

“I realized that I am going home and not going back but I still think that I made the right decision and there is really nothing more I can do here in Manila,” the CBCPNews quoted Sinnott as saying.

He said returning to his native land, he would leave a “big part of his heart” in the Philippines, especially in southern Mindanao, where he spent 58 years of his life as a missionary. “I will always remember the people that I met and helped me,” he said.

Only a few years out of the seminary in the early 1950s, Sinnott was assigned to do his mission in Pagadian City. “I was delighted when I got my appointment to the Philippines and I’ve never been sorry ever since,” he said.

He admitted that working in the country’s poorest region was hard, but he treasured every moment of it.

Unfortunately, he had to be transferred to Manila some three years ago—on Oct. 11—after armed men, suspected to be part of the Al Qaeda-linked Abu Sayyaf and some renegade members of the Moro Islamic Liberation Front, seized him from his home in Pagadian City.

He was released after a month in captivity.

Following his abduction, Sinnot was brought to the Columban headquarters in Manila and was no longer allowed to go back to Mindanao.

“For the long time that I’ve been here… it’s been a privilege for me to serve the people of the Philippines and I learned a lot more from them more than I gave, especially from the ordinary people for their goodness and their faith,” he said.