Is Chinese fishing fleet outside or inside PH territory? | Global News

Is Chinese fishing fleet outside or inside PH territory? 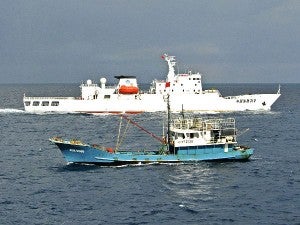 FISHING IN TROUBLED WATERS In this photo released by China’s Xinhua news agency, a Chinese fishery administration ship (background) guards a Chinese fishing vessel near Yongshu Reef in the Spratly Islands, in the West Philippine Sea, last Sunday. A fleet of 30 fishing vessels arrived at the reef where China has an ocean observatory and will spend 10 days of fishing, according to Xinhua. AP / XINHUA

The fishing fleet of 30 ships sent by China to the Spratlys is outside Philippine territory in the West Philippine Sea (South China Sea), the top military commander in Western Philippines said Wednesday.

“They are not within our EEZ (Exclusive Economic Zone). They’re far off,” Sabban said. “They’re closer to Vietnam,” he added.

Raul Hernandez, spokesperson of the Department of Foreign Affairs (DFA), said the Philippines had sovereignty over Kagitingan Reef.

“We have sovereignty and jurisdiction over that area because it’s part of the Kalayaan Group of Islands,” Hernandez said.

The DFA, however, seemed not to know where the Chinese fishing fleet exactly was.

Hernandez said the DFA was still waiting for reports from other government agencies on the exact location of the Chinese fishing vessels.

Under the United Nations Convention on the Law of the Sea, the Philippines has an Exclusive Economic Zone of 370 kilometers from its shores.

China last week sent its biggest fishing expedition in recent years to the disputed Spratly islands to assert its economic dominance of the entire West Philippine Sea, parts of which are claimed by the Philippines, Vietnam, Malaysia, Brunei and Taiwan.

The Philippines, locked in a territorial dispute with China over Panatag Shoal (Scarborough Shoal) north of the Spratlys, has told China not to send its fishing fleet beyond the Philippine border.

Sabban said Chinese fishing boats that would cross into Philippine waters would be apprehended.

“But if they are at that distance, they are no longer our concern,” he said. “They are not within our jurisdiction.”

The Chinese fishing fleet arrived on Sunday just as a Chinese rescue mission was extricating a People’s Liberation Army missile frigate from Hasa-Hasa Shoal (Half Moon Shoal), in the Philippine part of the Spratlys, where it ran aground on July 11.

The frigate limped back to China on the same day, and the Philippines said it would not file a diplomatic protest over what could have been an unintended entry into Philippine territory.

Sabban said it was hard to prove that the Chinese warship was intruding in Philippine territory because the area around Hasa-Hasa Shoal was considered an international sea lane.

“Had they stayed put there and barred other vessels (from the area), then that’s a different story since that is our territory,” Sabban said.

Meanwhile, the Bureau of Fisheries and Aquatic Resources (BFAR) on Wednesday said Filipino fishermen should fish near the shore and keep off the disputed Panatag Shoal (Scarborough Shoal) even though the fishing ban there had expired.

The BFAR said its advice was for the fishermen’s safety and had nothing to do with the territorial dispute between China and the Philippines over Panatag Shoal.

“We’re not encouraging them to go far,” BFAR Director Asis Perez said in an interview. “This is the time of the year when storms pass in the area more frequently. So we’re more concerned about their safety and security. We don’t encourage small bancas to venture far.”

Filipino fishermen are aware that going out to the shoal around this time of the year is dangerous, Perez said.

The BFAR banned fishing at Panatag Shoal and surrounding waters on May 16 following a similar ban imposed by China, which claimed the prohibition was an annual affair, although it made the declaration amid a maritime standoff with the Philippines at the shoal.

The Philippine ban was imposed for the conservation of resources. It ended on July 15.

China’s ban will end in mid-August.  With reports from TJ Burgonio and Tina G. Santos