Why there’s no Asean joint communiqué 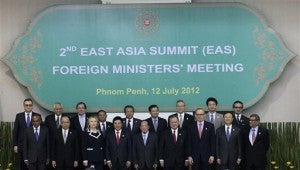 I am sharing this article with the Filipino people to inform them of the real state of the discussions during the 45th Association of Southeast Asian Nations (Asean) Ministerial Meeting in Phnom Penh on July 9. I was present during the discussions in the different sessions.

I feel it is my duty to present to all Filipinos the efforts made by the Philippine delegation to seek the unified support of Asean for the West Philippine Sea (South China Sea) issue that affects not only its member countries but the region as a whole.

Through this article, I hope to present the real picture during the ministerial meeting from the point of view of a Filipino, and in the process, correct the grave misimpression generated by some who were not present during those meetings.

The nonissuance of the customary joint communiqué after the 45th Asean Ministerial Meeting expectedly generated considerable reactions and commentaries because it was unprecedented in Asean’s 45 years of existence.

However, many of those reactions/commentaries were based on erroneous information. It is therefore essential to lay down the facts.

1. Fiction: There was no joint communiqué because Asean failed to agree on the code of conduct on the South China Sea.

Never before has our relations in the regional association been as strained as it is today—and much of the blame might be put on the Philippine side.

Fact: Asean had already agreed on the key elements of the proposed code of conduct on the South China Sea for discussion with China. The Philippines was successful in having its suggested main elements included to give the code the substance it requires.

The strain being felt by Asean is not attributable to the Philippines but it was reportedly due to the failure of the Asean chair (Cambodia) to gain a consensus.

Within the Asean framework, the Philippines needed to be resolute in giving primacy to national interest.

2. Fiction: The Philippine foreign minister denounced Chinese “duplicity” and “intimidation” in the South China Sea, souring the mood at the meeting designed to soothe tensions.

Fact: The “souring of the mood” was attributed by everyone who was there to the failure of Asean to issue a joint communiqué, resulting from the Asean chair’s firm position not to reflect the recent developments in the South China Sea despite the view of the majority of the member states that these developments impinge on the overall security of the region.

On the reference to “duplicity and intimidation,” the Philippines forged an agreement with a neighboring country for the simultaneous pullout of all vessels inside the shoal, which we undertook in good faith on June 4. Furthermore, the neighboring country agreed to remove its barrier at the entrance of the shoal.

Yet to this day, the neighboring country has not fulfilled its obligations under the agreement and has maintained its ships inside and outside the shoal, as well as its barrier, in its aim to establish effective control and jurisdiction in the shoal and surrounding waters.

3. Fiction: The Philippines “unilaterally escalated the rhetoric on the matter of contested islets and shoals—and then invoked the entire Asean community as a party to the confrontation.”

Fact:  The Philippines has been approaching the issue with patience and tolerance as we endeavor to avail ourselves of all peaceful means to resolve it in accordance with the rule of law.

However, the neighboring country decided to escalate the tensions resulting in the deployment of numerous vessels, as high as 96 at one point, as against our one vessel. The Philippines could not perpetually remain mute on the brazen acts of infringement on its territory and intimidation by a powerful country.

4. Fiction: “The very public statements emanating from Manila did not benefit from careful, quiet consultations with our regional partners.”

Fact: As early as 2010, the Philippines has been conducting bilateral consultations with its Asean partners on the issue of competing claims in the West Philippine Sea. In 2011, it proposed a framework in resolving the dispute within the Asean forum. This process of consultation led to the Asean decision to refer the Philippine proposal to Asean’s maritime legal experts.

5. Fiction: “In the view of some of our neighbors, Manila failed to do the patient work of consensus-building necessary for the association to take an explicit and common position on a complex territorial issue.”

Fact: Precisely mindful of Asean’s consensus-based decision-making process, the Philippines has been in continuous consultations with its Asean partners resulting in the Asean senior officials drafting of an “Asean Foreign Ministers’ Statement on the Situation in Scarborough Shoal” on  May 24.

One foreign minister, in particular, in his June 1 letter to the Asean chair, stressed the “necessity for Asean to issue a timely statement by the foreign ministers (on the issue) as our common effort to contribute to the maintenance of an environment conducive in the region which is of interest (to) all of us.”

At the 45th Asean Ministerial Meeting, Secretary Del Rosario discussed the situation in Scarborough (Panatag) Shoal. The text of the proposed joint communiqué’s item/subhead on the “South China Sea” was drafted by the Asean foreign ministers and several revisions were proposed to make the text acceptable to all.

However, the Cambodian chair consistently rejected any proposed text that mentioned Scarborough Shoal.

On his website, the Singaporean foreign minister, K. Shanmugan, said that it was a blow to Asean credibility that “it was unable to deal with something that is happening in our neighborhood and not say something about it.”

He added: “There’s no point in papering over it. There was a consensus among the majority of countries. The role of the chair in the context is to forge a complete consensus amongst all. But that did not happen.”

6. Fiction: Phnom Penh’s strong position against the Philippine position in Asean is quietly shared by Thailand, Malaysia, Singapore and Brunei.

Fact: As explained in Item No. 5, this view of the Philippines was strongly supported by many countries, including Singapore, Indonesia, Malaysia, Thailand and Vietnam.  Even the Asean secretary general expressed support for it.

7. Fiction: “When the ministerial meeting failed to issue a communiqué, the Philippine side bitterly accused Cambodia of, well, doing Beijing’s bidding.”

Fact: We did not accuse Cambodia of doing Beijing’s bidding, choosing to remain silent; other quarters preferred not to be silent.

8. Fiction: “Our strategy is in disarray. After the embarrassing outcome of the Phnom Penh meetings, we definitely have no Asean card to play in the confrontational path we chose to take against China.”

Fact: The Philippines has a three-track approach to advance its interests in the West Philippine Sea—political, diplomatic and legal. Asean is part of the political track.

The Philippines was able to gain the support of the majority of Asean member states as well as that of the Asean secretariat on the need to mention Scarborough Shoal in the proposed joint communiqué.

In all Asean meetings and in other forums, the Philippines has consistently advocated a peaceful and rules-based approach in resolving maritime territorial disputes in accordance with international law, specifically the UN Convention on the Law of the Sea (Unclos) and has been engaging China in continuing dialogues and consultations.

We are resolute in maintaining this strategic three-track approach.

9. Fiction: Our new ambassador to Beijing intimated that one of the difficulties she must deal with in her assignment is a view among her superiors that sees China as an enemy.

Fact: This is clearly a misquote of what has been written. The mandate of the Department of Foreign Affairs  is to reaffirm that we are seeking positive relations with China as a friend and partner and that the bilateral agenda should be vigorously pursued while abstracting contentious issues that should be dealt with separately.

10. Fiction: The Philippine foreign minister, in disgust, walked out of the meeting.

Fact: Secretary Del Rosario stayed on to finish the meeting and was steadfast in promoting and defending the Philippine national interest.

In fact, even when his microphone went silent as he first began to speak on the Scarborough Shoal issue, Secretary Del Rosario strongly articulated the Philippine position and proceeded to conclude his remarks.