Filipinos in US boycott Chinese products 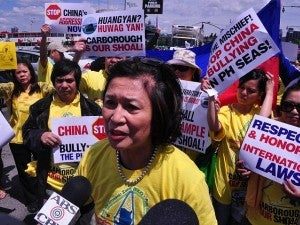 Loida Nicolas-Lewis, chair of the US Pinoys for Good Governance (USP4GG), in a protest rally in June against Chinese attempts to dominate the South China Sea, including territories historically and geographically belonging to the Philippines. Photo by ELTON LUGAY/INQUIRER FILE PHOTO

MANILA, Philippines—A group of Filipinos based in the United States, who led a worldwide day of protest against China in May, is spearheading a continuous boycott of Chinese products.

Loida Nicolas-Lewis, chair of the US Pinoys for Good Governance (USP4GG), said the group’s move to stop using all kinds of Chinese products was a way of matching China’s diplomatic and military arrogance in claiming Panatag Shoal and the Kalayaan Group of Islands in the West Philippine Sea.

The USP4GG is an umbrella organization of professional Filipinos with a membership of thousands.

“The ‘Boycott China Products Initiative’ will not be limited to Filipinos. This campaign will be carried out worldwide,” Lewis said in a press conference.

“We hope to achieve the level of response and outrage that was generated when the Americans found out that the US Olympic team’s uniforms for the London 2012 Olympics were made in China, despite being designed by Ralph Lauren, who is a distinctively American designer,” Laguatan said.

Laguatan further said that China’s claim to the Kalayaan Group of Islands and Panatag Shoal, which are within the Philippines’ 200-nautical mile exclusive economic zone, should not be taken seriously.

“As a basis of their claim, they are using a 2,000-year-old map produced during the Han Dynasty which showed that all the territory covered by the waters of the South China Sea belonged to China.

“It is no wonder China does not want the United Nations’ International Tribunal on the Laws of the Sea to settle the issue regarding its claim. They know the ridiculous argument will fail,” he added.