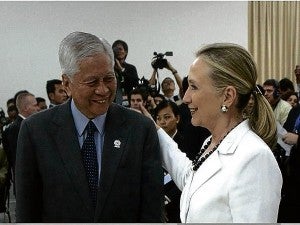 PHNOM PENH—Days of heated diplomacy at Southeast Asian talks ended in failure on Friday as deep splits over China prevented the Association of Southeast Asian Nations (Asean) from issuing its customary joint statement for the first time in the bloc’s 45-year history.

Foreign ministers from the 10-member bloc have been wrangling since Monday to hammer out a diplomatic communiqué, which has held up progress on a separate code of conduct aimed at soothing tension in the flashpoint South China Sea (West Philippine Sea).

China claims sovereignty over nearly all of the resource-rich sea, which is home to vital shipping lanes, but Asean members the Philippines, Vietnam, Malaysia and Brunei have competing claims in the area.

The long-stalled code of conduct, strongly supported by the United States, is seen as a way of reducing the chances of a spat over fishing, shipping rights or oil and gas exploration tipping into an armed conflict.

Asean Secretary General Surin Pitsuwan of Thailand said the Philippines and Vietnam wanted the statement to include a reference to a recent standoff between China and the Philippines at Panatag Shoal (Scarborough Shoal) in the West Philippine Sea claimed by both countries.

The Philippine Department of Foreign Affairs (DFA) issued a statement lambasting host Cambodia—a Beijing ally—for “consistently opposing any mention of the Scarborough Shoal at all.”

The Philippines lambasted the failure at the end of the talks, saying “it deplores the nonissuance of a joint communiqué… which was unprecedented in Asean’s 45-year existence.”

Taking “strong exception” to Cambodia, the Philippine statement said divisions undercut Asean’s goal of tackling disputes as a bloc “and not in a bilateral fashion—the approach which its northern neighbor (China) has been insisting on.”

The failure to issue a joint statement marks a sharp deterioration in efforts to cool tensions following recent events of naval brinksmanship over territory in the West Philippine Sea.

The Philippines and the United States called this week for a unified Asean that could use its collective clout to negotiate with China, while Beijing prefers to deal with its smaller neighbors individually.

China, whose trade and investment ties with Cambodia have surged in recent years, has warned that “external forces” should not get involved in the regional dispute.

The United States has stressed it is neutral in the long-running maritime dispute, despite offering to help boost the Philippines’ decrepit military forces.

US Secretary of State Hillary Clinton played down the deadlock with Asean at a news conference in Phnom Penh on Thursday evening.

“I have worked in many multilateral settings, and it is not at all unusual for much more mature organizations to be working on and discussing and even arguing about certain matters past the deadlines in order to try to see if there’s a way forward,” Clinton said.

But Clinton urged China to open talks with Asean nations to calm tensions over their rival claims in the West Philippine Sea.

Any code of conduct for the West Philippine Sea, she said, should create a framework for preventing and resolving disputes. Trying to settle matters bilaterally “could be a recipe for confusion and even confrontation,” she said.

“I think it would be fair to say that tempers in some of the private meetings have run hot. There have been some very tense back and forths,” one US official said.

China is a key bankroller of the much-criticized host Cambodia and some diplomats said Beijing had twisted arms in Phnom Penh to prevent any reference to the South China Sea disputes in the communiqué.

Cambodian Foreign Minister Hor Namhong expressed regret at the discord within Asean, but said he could “not accept that the joint communiqué has become the hostage of the bilateral issue (between the Philippines and China).”

Indonesian Foreign Minister Marty Natalegawa, who played a key role trying to broker a compromise, expressed “deep, profound disappointment” at the lack of consensus within the bloc.

“There is still a common view that we must, if anything, reinforce our efforts to work on the COC (code of conduct), to begin our talks with the Chinese on the COC,” he added.

Foreign ministers said on Sunday they had agreed on “key elements” of a draft code to be presented to China, but these were not released to the media.

China was also cool on the idea of starting negotiations, almost 10 years since the idea of creating a code was first agreed, saying it would only negotiate “when conditions are ripe.”

Analysts said the friction could “contaminate” future negotiations between Asean and China.

“I find it difficult to believe that Asean foreign ministers cannot come up with some formulation that satisfies all parties.”  With a report from Reuters