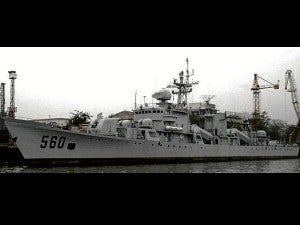 ‘THOROUGHLY STUCK’ . Photo of the Chinese frigate 560 that was reported to have run aground at Hasa-Hasa Shoal (Half Moon) some 111 km west of Palawan province, well within the Philippines’ 370-km exclusive economic zone. SOURCE: NAMRIA MAP/CHINA-DEFENSE.BLOGSPOT.COM

A Chinese warship has run aground on a reef off Palawan while patrolling contested waters in the West Philippine Sea, an Australian newspaper reported on Friday.

The report titled “Embarrassment: frigate runs aground”  came as the Philippine government started verifying reports that China had installed a powerful radar on Subi Reef, an islet 22 kilometers from the Philippine-occupied Kalayaan group of islands in the Spratly archipelago.

The warship is a Jianghu-class frigate “that has in the past been involved in aggressively discouraging Filipino fishing boats from the area,” the Morning Herald said.

“The accident could not have come at a more embarrassing moment for the Chinese leadership, who have been pressing territorial claims and flexing the country’s muscle ahead of a leadership transition later this year,” the article added.

The Philippines refers to Half Moon Shoal as Hasa-Hasa Shoal, which military sources said is only about 111 km (60 nautical miles) from the municipality of Rizal on the main island of Palawan province, well within the country’s 370-km (200-nautical-mile) exclusive economic zone.

Mayor Eugenio Bito-onon of Kalayaan in Palawan confirmed the incident and said it has been 10 days since it happened according to field reports.

“We heard the news from the Western Command about 10 days already,” he said in a text message to INQUIRER.net.

Military officials would not comment on the incident on Friday.

When reached for comment, Defense Secretary Voltaire Gazmin said the military was checking out the report.

The military’s Western Command (Wescom), which covers the West Philippine Sea, reportedly sent out a ship Friday afternoon to check out the report.

“If there is a need to offer assistance to help them leave the area, we will help,” Gazmin said.

Wescom officials in Palawan said a ship and a plane had been dispatched to verify reports of a Chinese frigate that got stuck on Friday on a coral reef off Hasa-Hasa Shoal.

Estrella said orders were being awaited from the national government on how to respond to the situation.

He said, however, that the military was prepared to provide assistance to the stricken Chinese vessel.

“Any ship or naval vessel in distress, we are duty-bound to provide assistance, regardless of whether or not they intruded into our territorial waters,” Estrella said.

Earlier reports said the mainstay equipment at Wescom are the BRP Laguna and an Islander reconnaissance aircraft of the Philippine Air Force.

The reports said all of the other equipment of the Naval Forces West have been deployed to the Panatag Shoal (Scarborough Shoal) area prior to Friday’s incident at Hasa-Hasa Shoal.

China’s defense ministry on Friday acknowledged that one of its frigates had run aground while conducting patrols in the disputed part of West Philippine Sea.

In Manila, the Chinese Embassy issued a statement saying the frigate ran aground around 7 p.m. on Wednesday.

“Currently the rescue work by the Chinese Navy is under way,” the embassy said.

The embassy said no injuries were reported.

The Sydney Morning Herald said salvage operations could be diplomatically challenging, given that the vessel appears to have run aground within the Philippines’ exclusive economic zone.

The stricken vessel has in the past been involved in aggressively discouraging Filipino fishing boats from the area, the Morning Herald said.

The accident could not have come at a more embarrassing moment for the Chinese leadership, who have been pressing territorial claims and flexing the country’s muscle ahead of a leadership transition later this year.

An Association of Southeast Asian Nations (Asean) foreign ministers’ meeting in Phnom Penh, Cambodia, ended in disarray on Friday, without a code of conduct for resolving conflicts in the West Philippine Sea.

On Thursday, China dispatched one of its largest-ever fishing expeditions from Hainan Island to the Spratly archipelago.

Chinese fishing boats regularly travel to the Spratlys, a potentially oil-rich archipelago that China claims as part of its territory on historical grounds, but parts of which are claimed by Brunei, Malaysia, the Philippines, Vietnam and Taiwan.

The 30-vessel fishing fleet deployed on Thursday is one of the largest ever launched from Hainan, according to a report from state-run news agency Xinhua.

The last notable incident at Hasa-Hasa Shoal occurred in 1995, when Philippine authorities apprehended 62 Chinese fishermen for poaching in the area and possession of explosives. The Philippines also impounded four fishing boats involved in the incident.

Wednesday’s accident at Hasa-Hasa Shoal came amid a worsening dispute between the Philippines and China over Panatag Shoal, where Philippine and Chinese vessels faced off with each other for two months.

China has refused to withdraw its maritime ships from the shoal even after the Philippines has pulled its vessels out of the area to ease tensions.

In Malacañang, Ricky Carandang, chief of the Presidential Communications Development and Strategic Planning Office, told reporters that if the setting up of the radar by the Chinese on Subi Reef was confirmed, the Philippines would view it as “provocative action.”

Such an action, he said, would not be consistent with a code of conduct in the West Philippine Sea that Asean is trying to formulate to prevent armed clashes with China in disputed parts of the sea.

Asked whether the Philippines would negotiate with China on its own or get the Asean involved to get China to agree to a code of conduct, Carandang said, “We are meeting with the Asean.”

Asean foreign ministers agreed on key elements for the code of conduct in their Phnom Penh meeting, but the preparation of the code may take more time now that the bloc is in disarray over China’s lobbying against the code. With reports from Frances Mangosing, INQUIRER.net, Norman Bordadora; Redempto Anda, Inquirer Southern Luzon; Tina G. Santos, The Sydney Morning Herald