Philippines is center of illegal tropical and aquarium fish trade 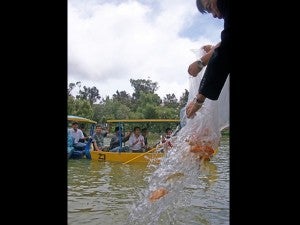 CAIRNS, Australia—Foreign demand for food and ornamental fishes has made the Philippines the center of an unsustainable and often illegal live reef and aquarium fish trade that is worth at least $1 billion globally, scientists and experts said.

Michael Fabinyi, a researcher at Australia’s James Cook University  who studied the live reef fish trade in Palawan for several years, said increasing demand from China and Hong Kong have pushed people to harvest species like grouper and snapper, which are considered “luxury” food, using methods damaging to the health of the fisherfolk and the marine environment.

Fabinyi, in his study of the live reef fish business in Balabac, Palawan, said the trade is an example of how the East Asian region is “consuming” the marine resources of Southeast Asia, which has to shoulder the long-term environmental and socio-economic problems of the trade.

The live fish trade, which is driven by the consumption of the growing Chinese middle and upper classes, is a lucrative global business, valued at about $1 billion, according to Yvonne Sadovy, a marine science professor at the University of Hong Kong. About 150,000 metric tons of live reef fish are traded annually, she said.

Protected Areas and Wildlife Bureau Director Mundita Lim said the practice of Palawan fishers to catch juvenile snappers and groupers has led to the collapse of the live fish trade in the province. “You should not get the juveniles from the wild. You should let them mature (and breed),” she said in an interview.

Fabinyi noted that China’s appetite for these fishes, which are part of their dining culture and cuisine, is much higher than the demand in the Philippines. Chinese restaurants in Manila, for instance, are not as well-stocked with luxury food fishes as their Hong Kong or Chinese mainland counterparts.

“The most obvious driver inducing people to get involved in the trade is the higher price of live fish, driven by increasing Chinese demand,” Fabinyi said in his 2012 study.

“From approximately 50 cents/kg in the late 80s when the trade began, the price of leopard coral grouper has risen gradually and consistently, and in 2011, a good-sized leopard coral grouper in good condition fetches a price of between P700 and P1000 (US$16-23)/ kg for fishermen,” he added. In some places of the province, the price could shoot up to more than $60/kg.

The live reef fishes are then transported to Manila, then Hong Kong, completing their journey in the Chinese mainland cities, where they are the main feature in social banquets and feasts.

Meanwhile, Elizabeth Wood, an expert from the Marine Conservation Society, said the Philippines is the “focal point” in the trade in aquarium fishes.

Latest data from 2005 showed that the country exported  5.7 million aquarium fishes to the United States, making the Philippines the world’s biggest supplier.

Indonesia trails behind the Philippines and has become the number one source of aquarium corals after the latter cracked down on coral trade last year, she said.

“Currently there is no evidence of any species collected for the marine ornamental trade being at risk of global extinction, but there is evidence of local depletions,” Wood said.

This trade in food and ornamental fishes is endangering the country’s long-term food supply and is posing new socio-economic problems for the Philippines, experts said. “If overfishing continues, there will be less fish,” Sadovy said.

Sadovy said the highly valued live fish species, which are now near overfished state, were traditionally harvested in the South China Sea, referred to as the West Philippine Sea by the Manila government. But the fish resources in this area are now depleted, she said.

While fishers who engage in live reef fishing get higher income, enabling them to access basic and economic services, they know that what they are doing is unsustainable, Fabinyi said. There are also health concerns for local fishers.

Because many of them use cyanide to collect ornamental fishes and unfiltered air compressors, many of fishers and divers end up with respiratory ailments. “Moreover, diving for extended periods without proper decompression has led to paralysis and, in extreme cases, deaths,” Fabinyi said.