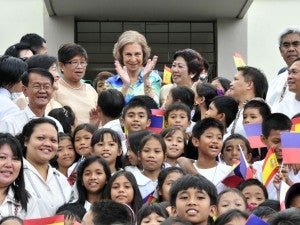 Queen Sofia of Spain, center, applauds as she poses with school children during her visit to a public school which is partly funded by Spanish government Wednesday, July 4, 2012 at Camalig township, Albay province, about 500 kilometers south of Manila, Philippines. Queen Sofia is on her fourth visit to this former Spanish colony to inspect various projects funded by Spain and for talks Philippine President Benigno Aquino III. (AP Photo/Nelson Salting)

LEGAZPI CITY—At least 5,000 flag-waving children in school uniform and residents were awed by the visit of Queen Sofia of Spain, the first foreign dignitary to come to Albay since Pope John Paul II’s visit in February 1981.

Wearing a printed blue blouse over white slacks and brown rubber shoes,  the Spanish queen arrived here on Wednesday amid a warm and festive welcome from thousands of people, mostly schoolchildren waving small flags of Spain and the Philippines.

After motoring a half-kilometer stretch from the city airport, the visiting dignitary walked on the red carpet as she unveiled the life-size statue of Jose Maria Peñaranda, the first Spanish official to become Albay governor, serving from 1834 to 1843, at the park named after him.

She visited Legazpi and nearby Ligao City and Camalig town—where Spanish development agency Agencia Española de Cooperacion para el Desarullo (Aecid) had poured funds for disaster risk reduction, an area where Albay province chalked up achievements and became a role model for the rest of the country and overseas.

After the unveiling ceremony, the queen accommodated a photo session with Albay’s town and city mayors, including other provincial and municipal officials, in front of the provincial capitol building.

She was accompanied by a convoy of local and foreign officials in the first leg of her tour of Spanish-funded projects in Albay. Some 16 km away from Legazpi City, she inspected Camalig North Central School in Camalig.

The Camalig Emergency and Educational Shelter is a 14-classroom emergency educational shelter  erected on Feb. 24, 2010, with a P24.7-million aid from Aecid.

Hundreds of schoolchildren mobbed the queen who cheerfully approached them and agreed to a photo session.

Aecid donated an ambulance and also funded the hospital’s training center so it would become the centerpiece of Albay’s health emergency program.

The queen proceeded to the recently launched Climate Change Adaptation Academy at the Bicol University in Legazpi, said to be the first climate change school in the country.

At the school, she was briefed by Mayor Rosal on the Legazpi City Solid Waste Management Project located in Barangay Banquerohan, where investments by Aecid amounted to some P110 million.

She was also briefed on the progress of four United Nations joint programs in Albay on climate change, nutrition, water and employment.

The Spanish government through Aecid has also released some P112.7-million funding support to Albay to finance various projects.