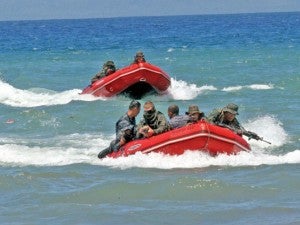 WAR GAMES American and Filipino Marines on rubber boats conduct a hostage rescue drill off Maasim in Sarangani on Tuesday. Some 450 members from the Philippine Navy and Philippine Coast Guard and 500 servicemen from the US Navy and Coast Guard participated in the 2012 naval exercises. JEOFFREY MAITEM / INQUIRER MINDANAO

A combat-ready Chinese patrol reached reefs and islands in the center of the Spratly archipelago on Tuesday and immediately began to assert China’s sovereignty over the disputed area in the West Philippine Sea (South China Sea).

China sent the patrol to provide muscle to its demand in late June that Vietnam correct a new law that put the Paracel Islands and Spratly Islands under Vietnamese sovereignty.

The dispute between China and Vietnam over the new maritime law, which had been in the works for years, is the latest example of Beijing’s determination to tell its Asian neighbors that the strategic waterway is China’s preserve.

The Chinese patrol arrived two days before the Philippine government was to decide when to send back maritime vessels to Scarborough Shoal, a resource-rich reef north of the Spratlys that both countries claim.

Representative Rodolfo Biazon of Muntinlupa City, chairman of the House defense committee, urged the government to redeploy ships to Scarborough Shoal as soon as possible.

Speaking to reporters after a committee hearing held at the military headquarters in Camp Aguinaldo, Biazon said the absence of Philippine vessels at Scarborough was giving the world the impression that the country had given up its claim to the shoal.

The President ordered a Philippine Coast Guard patrol vessel and a Bureau of Fisheries and Aquatic Resources (BFAR) survey ship home on June 15 because of stormy weather, temporarily ending a standoff with China at the shoal that began in early April.

According to the Department of Foreign Affairs, China had committed to withdraw its vessels. China never did.

“[We should] send back as soon as possible the Coast Guard vessel and the BFAR vessel and if need be even the Philippine Navy,” said Biazon, a former military chief of staff.

“The impression is we are giving up our claim,” he said. “We need to show our flag there.”

Biazon also urged the government to encourage Filipino fishermen to return to Scarborough Shoal, a traditional fishing ground, and assure them of safety through a Coast Guard escort.

He said the Navy could back up the Coast Guard.

Biazon said China had never previously contested the Philippine claim to Scarborough Shoal. He recalled that as a young naval officer in the early 1960s, he took part in joint exercises with US troops at the shoal.

“Nobody was complaining about it,” Biazon said. “If China traces its ownership of the shoal to as far back as history, why were they not complaining when we used it as target and planted our flags there in the early 1960s?”

In an interview with Reuters on Monday, President Aquino said the Cabinet, which was scheduled to meet today, would discuss the redeployment to Scarborough Shoal that the Department of National Defense had recommended to assert Philippine sovereignty in the disputed waters.

That recommendation drew a response from Beijing that suggested a Philippine return to Scarborough Shoal after a two-month standoff ended in mid-June would complicate the two countries’ search for a peaceful solution of their territorial dispute.

“We hope the Philippines will no longer issue information that provokes public opinion and avoid complicating the situation,” Liu Weimin, spokesperson of the Chinese Ministry of Foreign Affairs, told reporters in Beijing on Monday, responding to statements from Philippine defense officials that government vessels were ready to go back to Scarborough Shoal.

China also took as “stirring up tensions” President Aquino’s statement that the Philippines may ask the United States for help in surveillance in the West Philippine Sea through the deployment of spy planes to the disputed area.

Malacañang officials said Wednesday that the President’s statements should not be taken as provocative. With reports from Dona Z. Pazzibugan and Cynthia Balana