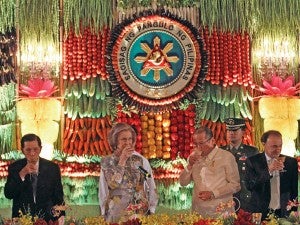 The state dinner hosted by President Benigno Aquino on Tuesday in honor of visiting Queen Sofia of Spain was, no doubt, fit for a queen.

The main course was certainly a gastronomic experience.

The Shangri-La Hotel prepared the four-course meal at the invitation-only dinner with the Spanish royalty at the Rizal Ballroom in Malacañang.

The food, cultural entertainment and the thrill of dining with the reigning queen of a former colonial master left Budget Secretary Florencio “Butch” Abad craving for more.

When asked, following the banquet, if the food was “fit for a queen,” the budget chief exclaimed, “Certainly.”

“I have never met a queen in my life. So it was a good incentive to attend the dinner,” said Abad, who was one of the senior members of the Cabinet who attended the banquet.

Asked about the queen’s demeanor, he said: “She’s not like Queen Elizabeth. She seems approachable and accessible, like a common man’s queen.”

He added that the cultural show during the banquet “must have touched her.”

“Great evening, I must say,” Abad summed up the whole new experience he and other guests from the Cabinet, diplomatic corps and Congress must have had that night.

The banquet became a reunion of sorts for the prosecution team in the impeachment trial of ousted Chief Justice Renato Corona—Representative Juan Edgardo “Sonny” Angara, who came with his wife, Tootsy; Representative Romero Quimbo, and the lead prosecutor, Representative Niel Tupas Jr.

Angara on Wednesday tweeted on micro-blogging site, Twitter, that Queen Sofia and King Juan Carlos spent their honeymoon in the country in 1962.

“Learned last night that Spain’s Queen Sofia honeymooned in Manila in the early ’60s. Still a princess then,” said the tweet, which was retweeted by several bloggers.

Angara, who is running for senator next year, described the banquet as a “warm dinner for the queen, marking a renewal of friendly ties between two countries inextricably linked by history and culture.”

He said that Queen Sofia recognized the gains made under the Aquino administration, while the President cited the importance of strengthening diplomatic and economic exchanges with the Kingdom of Spain.

Mr. Aquino and the queen offered the official toasts at the state dinner to symbolize what the President described as “the special and enduring friendship between the Philippines and Spain.”

Before offering a toast, Mr. Aquino noted that the queen’s husband, King Juan Carlos, presided over the return to democracy of Spain.

“It is in this transformation—and in the challenges faced by all newly restored democracies—that Filipinos and Spaniards have added a new bond of shared experience to their traditional ties of history and affection,” Mr. Aquino said.

The historical ramifications of Queen Sofia’s visit was not lost on the President who said that it was “a particularly auspicious date to welcome Your Majesty here, to this place where we are surrounded by the tangible reminders of history.”

He said that Tuesday marked the founding by national hero Jose Rizal of La Liga Filipina, a civic organization that sought to reform the corrupt and abusive Spanish colonial government.

“It is appropriate that now Your Majesty is once again here: To see the tangible outcomes of the partnership and friendship between our countries. Today, the Philippines and Spain stand shoulder to shoulder in pursuing the ultimate goals of both our nations: Fulfilling the vast potential of our peoples. And we are working together—whether in trade, sports, defense, or in tourism—in all the vital spheres of human endeavor.”

He also noted that Spain had been a reliable partner in development cooperation, with Spain’s official development assistance projects throughout the country helping finance livelihood and housing programs for Filipinos at the grassroots level.

Spain’s development assistance to the Philippines amounted to 28.9 million euros ($36.58 million) in grants and loans in 2011.

“Today, a new history is being made: Of a partnership between two nations with shared democratic ideals; of friendship based, not on nostalgia, but a principled commitment to the positive strength that can be derived from divergent histories, but with a shared, and affectionate, cultural affinity,” Mr. Aquino said.

In response, the queen emphasized that the Philippines would always be a “priority country for the Spanish cooperation for development.”

“The Crown, the government and the people of Spain see the Philippines not only as a sister country with whom we share many historical, social and cultural links because of our common past but also as a key partner in Asia,” the queen said.

“Mr. President, I cannot but praise your determination and that of your government to get the millions of Filipinos out of poverty and your commitment to transparency, good governance and accountability. You can count on the Spanish cooperation in your endeavor,” the queen said.

She said that the purpose of her five-day visit was to check on the progress of the development projects funded by the Spanish government, which made Spain the Philippines’ main European donor.

The queen  said that the Spanish cooperation with Philippine institutions and organizations was present in wide-ranging fields such as governance, peace process, health, disaster prevention and fight against climate change, among others.

She thanked the Department of Education for reintroducing the Spanish language in the public educational system following the passage of a measure authored by Senator Angara.

The queen said that the revival of the Spanish language was “not only because it is the past cultural heritage of the Philippines but also because it opens up opportunities to secure the well-being of future generations of Filipinos in a globalized world.”

The latest visit of Queen Sofia marked her fifth trip to the Philippines since 1995, when she accompanied her husband on an official visit.

She would be touring various schools, hospitals and museums that have received funding from Spain, which would take her to Albay province and Zamboanga City.