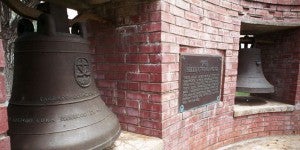 This May 2001 photo shows the two bells of Balangiga at F.E. Warren Air Force Base outside Cheyenne, Wyoming, that signaled an attack by Filipino insurgents on occupying American troops in 1901. The arrival of President Benigno Aquino on an official visit to the US raises the possibility that the State Department will announce plans to return of the war-trophy Bells of Balangiga to that country. AP

EASTERN SAMAR, Philippines—Fe Joy Campanero has never seen the bells of Balangiga Church, but is eager to find out how these look like. For after all, her great grandfather was the young boy who rang the bells more than a century ago to signal the attack by Filipino resistance fighters on an American detachment in Balangiga town in Eastern Samar.

Fifty-four US soldiers were killed while 18 others were wounded in what was viewed as the biggest US military setback during the Filipino-American War.

An outraged Gen. Jacob Smith ordered his men to shoot down anybody capable of carrying arms, including boys over 10 years old, and burn down communities on the island. Thousands of Filipinos were killed, and the American soldiers completed the pillage by taking the Balangiga bells with them as war booty.

Campanero, 51, and the rest of the 12,000 residents of Balangiga are clamoring for the return of the bells. Two of the bells are kept at the  Warren Air Force Base in US state of Wyoming, while a smaller one is at the US 2nd Infantry Division Museum at Camp Red Cloud in South Korea.

“The bells rightfully belong to Balangiga and are the property of the church,” said Campanero, a municipal employee.

Her great grandfather, Vicente Candeluces, was the boy who rang the bells on the early morning of Sept. 28, 1901, while the American soldiers were eating.

According to historical accounts quoting survivors, a group of “women” were holding a procession on the eve of the attack, followed by small coffins which purportedly bore the bodies of young cholera victims. The soldiers didn’t know that weapons were hidden inside the coffins and that the guerrillas were dressed as women.

The mass slaughter resulted in a US punitive expedition and reign of terror. Samar was turned into a “howling wilderness.” Balangiga would be thankful if the historic bells were finally returned, according to its present mayor, Viscuso de Lira.

The town’s senior citizens are among those who are raring to see the bells used by their forebears, said Fr. Joaquin Bertos Jr., the parish priest.

“They want to see and hear the sounds of the bells before they die,” he said.

Optimism had risen following recent reports that US officials were seriously considering the return of the bells.

US Marines Brig. Gen. Richard Simcock was reportedly sent by the US Defense Department to Wyoming to talk with veterans about the bells. It was seen as the strongest indication of Washington’s intentions in years.

But US war veterans and officials are against it.

Campanero, a member of the parish council, said she had talked with a military official about the possible return of the Balangiga bells early June.

She could not remember the official’s name but that he identified himself as commanding officer of an Army unit in the region.

“He told me that they already had preliminary talks with the bishop and some priests, including where the bells would be placed once returned,” she said.

Campanero was hoping that the bells would be back so that this year’s celebration of the Balangiga Encounter Day would be different.

“We would not be doing over and over again the painful experience [of reenacting the Balangiga Encounter], and the relationship between the Philippines, the people of Balangiga and the Americans would now be better,” she said.

The bells could be kept at a belfry-like structure that would be repaired and secured at the right side of the church, Father Bertos said.

“What I know, according to the story of the [Bishop of Borongan], is that there is really a plan to return the Balangiga bells within this year,” the priest said.

For several years, the residents have been reenacting the 1901 event.

A P6-million Balangiga Encounter Monument and Memorial Library designed by National Artist Napoleon Abueva now stands at the plaza to remind people of the heroism of the local freedom fighters.

De Lira said that recently, a retired US serviceman who married a native of Balangiga visited him and gave him photos of the bells in Wyoming.

One of the photographs showed an inscription engraved on one bell that reads:

“Used by the Philippinos (sic) to sound signal for massacre of Company—Ninth Infantry at Balangiga, P.I. 28th September 1901.”