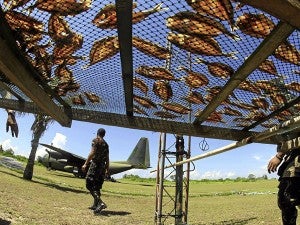 Soldiers stationed in the Philippine-claimed Kalayaan Island in the contested Spratlys group of islands, dry fish in an open field that also serves as a landing strip for Philippine Air Force planes. ERNIE U. SARMIENTO/Inquirer File Photo

MANILA, Philippines—A militant group warned Wednesday that the Philippine government’s proposed oil and gas exploration activities off Palawan, particularly in areas near the Spratlys, may trigger a shooting war between the Philippines and China or other claimants to the chain of islets.

According to the Pambansang Lakas ng Kilusang Mamamalakaya ng Pilipinas (Pamalakaya), pursuing the Philippine Energy Contracting Round 4 would be “like an open declaration of war not only to China but to other claimants to Spratlys that include neighbors Taiwan, Vietnam, Brunei, Indonesia and Malaysia.”

This is why, the group said in a statement, it was urging President Benigno Aquino III to call off the planned bidding for contracts for the exploration and development of 15 potential petroleum blocks.

Pamalakaya national chair Fernando Hicap noted that eight of the 15 offshore areas up for bidding can be found within the Northwest and East Palawan basins, which he said were near the disputed Spratly Islands.

“The Aquino government should recall this mind-boggling and provocative undertaking and resort to collective diplomacy among claimant nations,” Hicap said.

Earlier, the Chinese government warned the Philippines and other claimant nations not to engage in oil exploration in areas claimed by China.

Energy Undersecretary Jose M. Layug Jr. said Tuesday that the 15 blocks being offered for bidding were well within Philippine territory. In recent roadshows held in Australia and Singapore, over 100 investors expressed interest in bidding for the contracts and not one raised questions regarding the legal claims of over these blocks, he added.

Layug noted that investor confidence and interest remained high despite the Philippine government’s verbal row with China over the disputed Spratlys.