Frontex: most illegal migrants to EU head to Italy 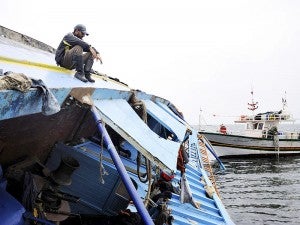 A Tunisian fisherman sits on a capsized ship that originated from Libya and which according to the United Nations refugee agency was transporting an estimated 850 refugees, as it lies on a sandbar 35 kilometers north of the Tunisian islands of Kerkennah on June 4. AP

ATHENS, Greece—The main flow of illegal migrants seeking to enter the European Union has shifted dramatically from Greek borders to Italian islands due to the conflicts in north Africa, the bloc’s border protection agency said Tuesday.

A total of about 33,000 people were detected trying to enter the 27-nation bloc in the first three months of the year, with 22,600 of them detected at Italian borders, mainly in the area around the island of Lampedusa, said Frontex deputy director Gil Arias Fernandez.

Greece, which was previously the main point of entry for people seeking to cross into the EU, saw 7,200 illegal entries in the same time period.

In the same three months of 2010, just 147 illegal migrants had been detected trying to enter Italy, compared to 13,085 attempting to get into Greece, Frontex figures showed.

Fernandez said that while it was difficult to predict what would happen in the rest of the year, “the situation will remain quite dramatic in the central Mediterranean.”

According to Frontex, more than 41,000 people attempted to enter the EU in the area around Lampedusa, and the other Italian islands of Sicily and Sardinia from January to today, including 1,600 people over the weekend.