China says will not use force in West Philippine Sea 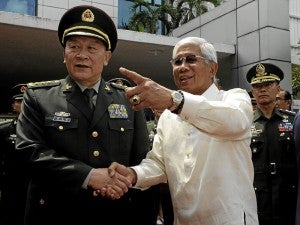 Chinese Defense Minister Liang Guanglie shakes hands with his Filipino counterpart Voltaire Gazmin after their one on one meeting in Manila recently. AFP

BEIJING—China said Tuesday it would not resort to the use of force in the tense West Philippine Sea (South China Sea), after its neighbors expressed concern about its more assertive maritime posture.

“We will not resort to the use of force or the threat of force,” foreign ministry spokesman Hong Lei told reporters.

“We hope relevant countries will do more for peace and stability in the region,” Hong said.

Vietnam on Monday staged live-fire exercises following recent confrontations at sea with China which reignited a long-standing dispute over the sovereignty of two potentially oil-rich archipelagos, the Paracels and Spratlys.

Hong insisted Vietnam was to blame for the recent flare-up, sparked by a confrontation between Chinese surveillance vessels and a Vietnamese oil survey ship.

“Some country took unilateral actions to impair China’s sovereignty and maritime rights and interests, and released groundless and irresponsible remarks with the attempt to expand and complicate the issue of the South China Seas,” Hong said, in a thinly veiled reference to Hanoi.

“This is where the problem lies.”

He said China was willing to hold direct negotiations with the other nations embroiled in territorial disputes in the South China Sea within the framework of a code of conduct agreed to in 2002.

Tensions have also risen this year between China and the Philippines, another claimant to the Spratlys, which on Monday said it would from thereon refer to the South China Sea as the “West Philippine Sea”.

Taiwan at the weekend reiterated its claim to the Spratlys, and said missile boats and tanks could be deployed to disputed territory.

Brunei and Malaysia have also staked claims in the area.