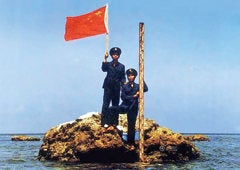 RAISING THE FLAG A member of China’s ocean expedition team raises the Chinese flag while another holds a survey rod on Scarborough Shoal, which China refers to as Huangyan Island. The Philippines calls the shoal some 370 kilometers west of Zambales Panatag. Chinese Embassy website

China has no immediate plans of pulling out its vessels at Scarborough Shoal in the West Philippine Sea (South China Sea), the Chinese Embassy said Monday.

In a text message to the Philippine Daily Inquirer, Zhang Hua, spokesperson and deputy chief of the political section of the Chinese Embassy, said Beijing had not expressed any intention of withdrawing its service ships from Scarborough Shoal, which both China and the Philippines claim.

Contrary to Foreign Secretary Albert del Rosario’s statement to reporters on Friday, China did not commit to withdraw its seven vessels from the shoal.

“There is no such commitment from China,” Zhang said.

In Beijing, Hong Mei, spokesperson for the Chinese Ministry of Foreign Affairs, wondered “where the so-called commitment the Philippine side mentioned on China’s withdrawal of vessels came from.”

Hong said China hoped “the Philippine side can restrain their words and behavior and do workings conducive to the development of the bilateral relations” between the two countries.

China, Hong said, “will continue to maintain administration and vigilance” over Scarborough Shoal, which Beijing refers to as Huangyan Island. Manila calls it Panatag Shoal or Bajo de Masinloc.

But more than 20 Chinese fishing boats stationed at the shoal’s lagoon are withdrawing because of bad weather, according to an advisory issued by the salvage and rescue unit of China’s Ministry of Transport on Sunday.

Raul Hernandez, spokesperson for the Department of Foreign Affairs (DFA), said Monday night that China’s announcement of the pullout was “consistent with our agreement with the Chinese government on the withdrawal of all vessels from the shoal’s lagoon to defuse tensions” in the area.

Two Philippine vessels had been facing off with seven Chinese government vessels at the shoal since April 10 after Philippine authorities caught Chinese fishermen poaching for sharks and collecting rare clams and corals in the area.

Both asserting sovereignty over the shoal, the two countries had refused to budge. The shoal is within the exclusive economic zone of the Philippines, which has proposed to bring the dispute to the International Tribunal on the Law of the Sea for settlement.

Though indirectly, the United States has weighed in, announcing two weeks ago details of a new military strategy that would see 60 percent of US naval assets moving to the Asia-Pacific region before the end of the decade, and announcing assistance for the modernization of the Philippine military.

President Benigno Aquino traveled to Washington last week and had discussions with US President Barack Obama, who stressed the importance of the US-Philippine Mutual Defense Treaty and renewed US pledges of helping the Philippines update its defenses.

At the time, Typhoon “Butchoy” was approaching the Philippines from the Pacific Ocean and a low-pressure system over Palawan province was combining with its winds to create squalls dangerous to shipping in the West Philippine Sea.

Asked by reporters on Friday if China was withdrawing its vessels, Del Rosario said, “We are waiting for them to comply with their commitment.”

It was understood that China and the Philippines had agreed to break a two-month standoff at Scarborough Shoal to save the crew of their vessels from unnecessary exposure to danger in stormy seas.

As of Friday, China had seven government ships outside the lagoon and 20-26 fishing boats in the lagoon, according to the DFA.

On Sunday, Malacañang, through deputy presidential spokesperson Abigail Valte, said, citing Del Rosario’s statement about a Chinese commitment, the Philippines was waiting for China to recall its vessels from the shoal.

But instead of pulling out its ships from the area, the Chinese government is sending another vessel, the “Nanhaijiu 115,” to the shoal, ostensibly to assist the Chinese fishing boats in making a run for shelter amid stormy weather.

In its advisory, the Chinese transport ministry cited “inclement weather and strong tides” at Scarborough Shoal as the reason for withdrawing the fishing boats.

The agency also said it was deploying the Nanhaijiu 115 to the shoal to “help Chinese fishermen and fishing boats pull out safely for shelter” in undisclosed locations.

The deployment of the Nanhaijiu 115 brought to eight the  number of Chinese government vessels stationed at the shoal.

On Sunday, China welcomed President Aquino’s order pulling out the two Philippine vessels from the shoal and expressed hope it would calm tensions in the area.

A statement on the Chinese Embassy’s website on Monday said “the Chinese public service ships have continued to keep close watch over Scarborough Shoal waters to provide administrative and other services to Chinese fishing boats in accordance with China’s laws, so as to ensure Chinese fishermen a good environment for operations in their traditional fishing grounds.”

The continued presence of the Chinese ships in the area was also meant to “prevent further provocation by the Philippines,” it also said.

Zhang told the Inquirer on Sunday that “the Chinese side has been urging the Philippine side to take measures to deescalate the situation” at the shoal.

That meant China wanted the Philippines to withdraw its vessels from the area. The vessels were ordered home on Friday but Del Rosario said, “When the weather improves, a reevaluation will be made.”

Last week, both the Philippines and China repositioned their ships posted at the shoal, easing tensions that had been building up since the standoff began in April.

But Bayan Muna Representative Neri Colmenares is worried that the premature departure of the Philippine vessels may have weakened the country’s claim of sovereignty over that part of the West Philippine Sea.

Colmenares said Monday that China had shown no sign of reciprocating. “The President should immediately replace the two boats that left the [shoal],” Colmenares said. “The government only weakened its claim of effective control and jurisdiction if we have no naval presence in our waters.”

The Department of National Defense said on Sunday that the withdrawal of the two Philippine vessels would not affect the country’s claim. There are many other ways of monitoring the area, according to the department’s spokesperson Peter Galvez.

Del Rosario had told the Inquirer that despite an easing of tensions between Manila and Beijing, the Philippines would press its plan to bring the dispute to the International Tribunal on the Law of the Sea. With reports from Gil C. Cabacungan and AFP﻿