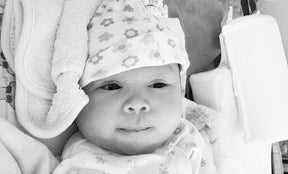 One of my biggest frustrations of late was my inability to hug my daughter-in-law and greet her on Mother’s Day last May 13.  Everyone in our family — her husband (my son), especially  — as well as hers, shares that grave unfulfillment, for she had been the greatest mother any child could have.

Four days earlier on May 9, their firstborn and the first grandchild for me and my wife, died of respiratory complications from Aicardi Syndrome.  She was 4 months, 12 days old.

Six months in her mother’s womb, the baby was diagnosed with the syndrome, a female-only disorder so rare there are only fewer than 850 reported cases in the US, according to medical websites.  If my math is correct, that’s just a little over 0.0005 percent of the total US female population of about 157 million, as per 2010 Census.

Aicardi Syndrome is mainly characterized by the partial or total absence of the corpus callosum, the structure that connects the left and right sides of the brain and which allows them to communicate.  It was discovered only in 1965, and modern-day science and medicine have yet to fully unravel its whys and wherefores.  Its cause is still unknown.

While the University of California San Francisco-Benioff Children’s Hospital is known to be leading the research into the syndrome here in the US, and possibly the world over, the initiatives have yet to arm the medical community, particularly neurologists and neonatologists, with the precise skills set to manage, for instance, one of Aicardi’s life-threatening symptoms:  seizures, or what doctors call infantile spasms.  Even the combination, dosage, and frequency of administration of the various seizure-managing drugs are consistently a trial-and-error routine.

‘Devastated’ would seem an understatement to describe how the young couple felt when the team of doctors at UCSF broke the news, after studying the results of the series of tests on their unborn baby, who they named Andrea.  And then the heavens came crumbling down upon them when doctors, together with a counselor, painted a heart-wrenching scenario.

Andrea may live for an hour, a day, a week, a month, a year, a decade .  Or beyond.  She may not be able to walk and talk, although aggressive therapy programs down the road may provide some, if not very limited, mobility and speech capability.  She may not even know how to cry properly or even smile, much less let out a hearty baby laugh.  She may even progressively lose her vision.  And as if that isn’t yet one debilitation too many, she will definitely have seizures.

The couple told us how the team of professionals at UCSF indicated to them that the choice of carrying the pregnancy through the term, or terminating it, was solely theirs.  I would later realize just how special our granddaughter would be, and the core reasons she needed to live even for a brief period.  I thank our son and daughter-in-law for their decision.

Andrea was born December 11.  Pardon the cliché, but we shed tears of immense joy when the nurse brought her out of the delivery room for us to see her for the first time:  she was the prettiest thing that ever came to my family.  She looked every bit, from head to toe, a normal baby.   There and then, we banished mental images of a syndrome-struck Andrea.

Before long, the celebratory mood was overtaken by hopefulness and prayerfulness.  The seizures, which by most accounts in medical websites, normally start when the baby turns 3 to 6 months old at the earliest (many children with Aicardi experienced their first seizure only when they reached the age of 3 to 5 years old, and some even later), did start on Andrea just a few days after she was born.  She also started showing signs of effortful breathing.

After an entire month at UCSF’s Neuro Intensive Care Nursery, under the 24/7 care of a one-on-one nurse and round-the-clock motherly attention from our daughter-in-law, Andrea came home to their Castro Valley place.  On the eve of the homecoming, our son made sure his younger brother and sister festooned the apartment with banners, buntings, and balloons to greet the little princess.

Never did my wife and I ever imagine our son, as well as our daughter-in-law, taking on the enormous task of caring for a unique baby.  Our son, who as a kid was afraid of doctors and needles, was now Andrea’s medicine man, who deftly and meticulously prepared the drug concoctions in precise measurements, and administered them at the exact hour (his cell phone, in addition to a timer, sounded off periodic alarms).  He was also the point man of Andreas’s UCSF doctors; he called them regularly to consult about any changes (or non-changes) in her seizure pattern, frequency, and intensity, as well as other issues.  He cleaned her up and changed her nappies.  But he never reneged on his cooking and other household chores.

Two days after we celebrated her second-month birthday, Andrea had to be rushed back to UCSF.  She caught the cold virus and was not feeding very well.  She had become a tad too weak and unresponsive.  Increasingly, too, her breathing difficulty had become much more pronounced as she struggled for air.  We didn’t think she and our daughter-in-law would be in for a longer-haul at the hospital, but they were there for no less than six weeks.

Immediately upon her arrival at UCSF, doctors had to put in two tubes up her nostrils – one for feeding, the other for oxygen.  Her colds did not allow her undersized lungs (yet another manifestation of Aicardi, as far as I understood), to synchronize the simultaneous intake of food and air.  Doctors said that in time, the cold virus – and the mucus stuffed in her respiratory system – would go away, and she would be weaned off the tubes.

It did not happen.

During those six weeks, as in Andrea’s first extended hospital stay, rarely did our son miss sleeping over at UCSF, his after-work destination and now his family’s second home.  If he didn’t spend the night there, he has had to go home to check on their Castro Valley apartment, gather the mail, or retrieve clothes and personal stuff for his wife.

Even more rarely did my wife and I miss seeing Andrea at the hospital, and bonding with the couple over dinner every Wednesday, and lunch every Sunday after church.  We were a picture of a happy family that maintained faith in the ‘fighter’ in Andrea, in her doctors, and above all, in the goodness of her Maker.

On the advice of doctors, who admitted there was nothing more they could do after seeing through our granddaughter’s recovery of strength , Andrea was to continue at home whatever regimen they had established anew for her.  This time, the family left UCSF with a suction machine (to vacuum off the mucus collecting in her throat and nostrils), a portable oxygen machine and tank (for use during the drive home; the larger 24/7 machine, called concentrator, had been delivered by the healthcare provider at their home the day before), feeding machine (which pumps milk through the feeding tube), and a new, more challenging skills set for the parents in using the medical equipment.

The Wednesday and Sunday sit-down family dining became an even more poignant ritual of bonding and sharing.  Looking back though, we all had actually begun cementing family relationships the day Andrea, in her mother’s womb, was diagnosed with Aicardi.

But I must admit that never before had I seen my son, next to our daughter-in-law, fully consumed with the noblest of missions:  providing a lifeline to a human being.

A complete departure from his computer-related work as Field Technology Specialist in downtown San Francisco, and car-tinkering hobby at home, he had become Andrea’s one-on-one nurse (he has since extended his leave from work).  He worked the machines, and practically monopolized the task of suctioning off mucus.  He prepared and administered her anti-seizure meds.  He pretended to laugh off — before gently coaxing her into staying still and quiet — her whimpering when the going got a little rough with the ‘vacuum.’  But he told me one time that he often caught Andrea in tears during procedures, while just so much as meowing like a cat.  My heart cried out:  “Those moments must have been heartbreaking.”

One day, our son had to sell his work commute car, which he had bought and given so much TLC long before Andrea’s arrival.  The couple had to buy a high-end stroller, one with the seat that supported my granddaughter’s abnormal spine.  He announced to her in jest:  “See, princess …. Daddy sold his car to buy you your own car.”  My wife and I were there, and we couldn’t have felt prouder of the couple.

They then soon noticed that Andrea was sweating even in cold weather, and notwithstanding the cool breeze a fan near her crib blew.  On phone consultation with the UCSF doctor, they were told she could be working very hard to breathe despite the oxygen, and she might be requiring colder ambient temperature, day and night.  So one evening, the couple shopped for a portable air conditioner, and vowed to negotiate yet again with PG&E on their electric bill on the strength of a medical certificate, as they had successfully done with Andrea’s concentrator.

After a few more days, Andrea slipped into a very unresponsive state and was rushed to the emergency room of Valley Care Medical Center in Pleasanton, where UCSF-Benioff  Children’s maintains satellite operations.   She died past 3:30 p.m. on a Wednesday, May 9.

Both my family and my daughter-in-law’s will always be grateful to the team of UCSF-Benioff specialists for bringing to the fore everything they knew and had in their research journals to bring our granddaughter as closest as possible to living a normal life.  But it is hard not to think that Andrea had enriched their research into Aicardi Syndrome.

It might even be harder for the hospital’s neurologists, neonatologists, pediatricians, and medical researchers not to admit that Andrea’s 10-week stay with them – or her four-month survival, for that matter – and the outcomes and risks of the trial-and-error procedures they have had to do with her were all worth it.  This, in their continuing bid to help current and future Aicardi patients in the country, and around the world, live a longer, better-quality life.

For me and my wife, we now see Andrea as our little angel who had prepared our son and daughter-in-law for lifetime parenthood.  She taught them, and everyone of us in the family, the value of faith, patience, perseverance, and sacrifice.

Personally, I see Andrea as the great catalyst who transformed our son from a good man to a mature, responsible father of her future siblings.

Happy Father’s Day, son!  I couldn’t be happier for you and my daughter-in-law, as well as for Andrea.