No rescue operation yet for missing Arab journalist 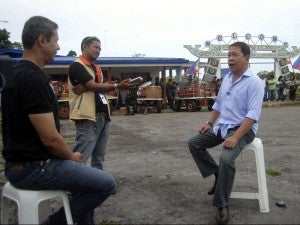 Veteran Middle Eastern TV reporter Baker Atyani, left, interviews Sulu Governor Sakur Tan, right, at the airport in Jolo during his taping of his story of the island in this photo taken on Monday. AP

ZAMBOANGA CITY, Philippines—There will be no search and rescue operations for Middle Eastern journalist Baker Abdulla Atyani and his two Filipino crewmembers for now as police consider them to be “just missing.”

“They are still missing—that is still the status. We cannot say abduction because there are no signs of struggle even as we checked their rooms and how they were fetched by a driver last June 12, said Senior Superintendent Antonio Freyra, the Sulu police chief.

But Freyra said there was also the possibility that Atyani’s team was not missing at all as “they might just be doing an exclusive story out there.”

Atyani and his Filipino colleagues—cameraman Ramelito Vela, audioman Rolando Letrero and a still unidentified driver—failed to return after they were fetched by a white multicab from the Sulu State College Hostel in Jolo town on June 12.

“Maybe he was pursuing a story and he wanted to keep us at bay. Maybe he arranged a meeting with the leadership of the Abu Sayyaf Group and he didn’t want others to cover it,” he said.

Instead of a search-and-rescue operation, Freyra ordered all town police chiefs in Sulu to set up tight checkpoints and dragnets.

“If they (Atyani and team) are sighted, invite them and bring them back to the office or hotel or send them back to Manila,” Freyra said he told municipal police chiefs.

“We were informed that they just went missing. If it is established that they were abducted, then we will meet with the police to plan an operation,” Coballes said.

Coballes added that Atyani’s team also failed to coordinate with the military for his security.

Freyra said he was planning to recommend that a strict policy be applied on  visiting journalists and foreigners.

“Hihigpitan namin ang movement ng media and other foreign visitors unless they ask for security, otherwise we will advise them to leave or invite them to report to the office,” he said.

Atyani was supposed to return to Dubai on June 13, after a day of coverage in Sulu, according to Munir Jannaral, a Manila Times correspondent who arranged his Sulu trip.

“He had limited schedule and he wanted to interview Muslim leaders,” Jannaral told the Inquirer by phone.