The historical irony of Independence Day 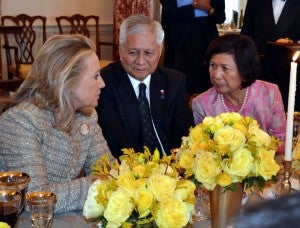 Secretary of State Hillary Clinton discusses US assistance to the Philippines with Secretary of Foreign Affairs Albert Del Rosario and Loida Nicolas-Lewis, chair of US Pinoys for Good Governance, at the luncheon hosted by the US State Department for President Benigno S. Aquino III on June 8. Photo by Rodel Rodis

The “theoretician” of the Philippine Revolution and author of the Constitution of the Malolos Republic, Apolinario Mabini, was not pleased with a phrase in the Declaration of Philippine Independence that Ambrosio Rianzares Bautista drafted at the direction of the Republic’s first president, Gen. Emilio Aguinaldo. When he first heard it on June 12, 1898, Mabini asked that the phrase be excised. At Aguinaldo’s insistence, however, the phrase was retained.

The controversial phrase was the new republic’s proclamation of its independence from Spain “under the protection of our Powerful and Humanitarian Nation, The United States of America”.

Aguinaldo had invited then Commodore George Dewey — who vanquished the Spanish fleet in Manila Bay on May 1, 1898 — to attend the Declaration of Independence festivities at Kawit, Cavite on June 12 so that Dewey could report to his superiors in the United States that Filipinos were fully capable, intellectually and organizationally, of governing themselves. But Dewey, under specific orders from Navy Undersecretary Theodore Roosevelt to not make any commitments to Philippine independence, dispatched an artillery colonel, L.M. Johnson, to represent him instead.

Col. Johnson signed the Philippine Declaration of Independence as a witness but he signed it simply as a tourist observing a native event.  The United States was not interested in helping the new republic ward off foreign invaders when it had every intention —  a “manifest destiny” — to colonize the Philippines for itself.

The historical irony is that almost 114 years later, on June 8, 2012, Aguinaldo’s current successor, Pres. Benigno S. Aquino III, would meet the U.S. president, Barack Obama, to seek what Aguinaldo had sought — “the protection of our Powerful and Humanitarian Nation”.

As the Washington Post reported (“Philippine President Aquino seeks U.S. military aid”, June 9, 2012), “the president of the Philippines made a direct pitch to the White House Friday to help bolster his country’s relatively weak defenses as the island nation increasingly finds itself tangled in territorial conflicts with China.”

At a press conference held after the White House meeting, Obama  pledged US support for “Aquino’s efforts to upgrade the notoriously antiquated Philippine military and build a “minimum credible defense posture.”

The United States has stepped up its military aid to the Philippines, including last year’s delivery of a decommissioned coast guard cutter, the BRP Gregorio del Pilar, to replace the Rajah Humabon, a World War II-era vessel, as the Philippine Navy’s biggest ship. Another cutter, the Dallas, is due to be delivered later this year. About eight more coast guard cutters are in the pipeline.

It will be recalled that in his first State of the Nation address delivered on July 26, 2010, Pres. Aquino pledged to upgrade the Philippine Navy which had only 32 old naval vessels (“panahon pa ni Gen. MacArthur”) to patrol 32,000 nautical miles of territorial waters. He said then that he would even lease out the Philippine Navy headquarters on Roxas Blvd. to garner the proceeds to purchase new vessels for the navy.

Aquino’s state visit to the U.S. has focused American media attention to the Scarborough Shoal conflict which had been largely ignored until US Filipinos organized protest rallies in front of all the Chinese consular offices in the US on May 11.

As the New York Times reported on June 9 (“Obama Expresses Support for Philippines in China Rift”), “a festering quarrel that began over rare coral, giant clams and sharks in a distant sea made its way to the Oval Office on Friday, as President Benigno S. Aquino III of the Philippines sought the backing of President Obama in a maritime dispute with China.”

Two months after it began, the New York Times reported on the “tense standoff” between the Philippines and China “over rights to a triangular cluster of reefs and rocks in the South China Sea known as Scarborough Shoal.”

Pres. Aquino received an expression of support from Secretary of State Hillary Rodham Clinton at a State Department luncheon in his honor held before the White House visit. As the Times reported, “Clinton reiterated that the United States had an interest in the “maintenance of peace and stability” and “freedom of navigation” in the South China Sea. She encouraged Mr. Aquino to resolve the dispute with Beijing peacefully, and she warned that the United States would oppose “the use of force or coercion.”

At that State Department luncheon which I attended, Sec. Clinton also announced that the U.S. and the Philippines were “working closely together to increase information and intelligence exchanges and coordination on maritime domain issues.”  The United States, Clinton said, will support the construction, outfitting, and training of a new National Coast Watch Center in the Philippines.

In its Independence Day editorial, the Philippine Daily Inquirer lamented the fact that “more than a century after Spain ceded the Philippines to the United States, the territory has become more and more porous because of the inability of the nation-state to secure its borders. Bajo de Masinloc, the shoal off Zambales as named by the Spaniards, has become the poaching ground of Chinese fishers and has been arrogantly claimed by China by historic right, even if it is Philippine territory by virtue of the Treaty of Paris and of the United Nations Convention on the Law of the Sea. The same sad situation is happening in the Spratlys and elsewhere. All over the archipelago, smuggling, illegal trade in arms and drugs, human trafficking, fundamentalist kidnapping, and even terrorism thrive because of the failure of the nation-state to police its borders.”

Ironically, under the “protection” of, and renewed commitment of military assistance from, the United States, the Philippines may yet succeed in policing its borders. Perhaps China did the Philippines a huge unintended favor by menacing its waters off Masinloc two months ago.