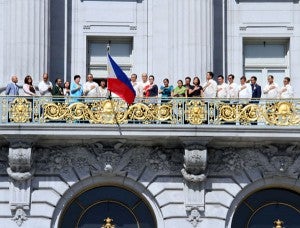 SAN FRANCISCO, California—Every year, on the 12th of June at 10 in the morning, Philippine flag is raised at the balcony of the quaint City Hall of San Francisco.

Paynor was joined by Mayor Ed Lee’s representative, chief of protocol Charlotte Schultz, and Filipino American leaders as the Philippine flag was unfurled at 10 a.m. and the national anthem, Lupang Hinirang, was sung.

Paynor said that he has been assigned to many world cities but it is only in San Francisco that the Philippine flag is raised during Independence Day. The city, in fact, has declared June 12 as Philippine Heritage Day.

At the reception after the flag raising ceremony, Chief of Protocol, Charlotte Schultz, praised the contribution of Filipinos in San Francisco be it cultural, business or politics. She then introduced Carmen Colet, the new Chair of the San Francisco Manila Sister City Committee. Colet bared that there are plans for the organization to bring Mayor Ed Lee to Manila in 2013.