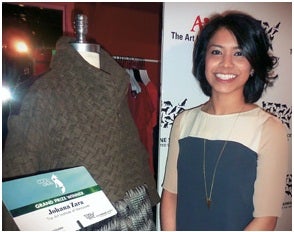 Johana Zara, a Filipina-Canadian fashion design student from The Art Institute of Vancouver emerged as the grand prize winner of the seventh annual Cool vs. Cruel Fashion Design Competition, a national design contest sponsored by The Humane Society of the United States and The Art Institutes.

The Cool vs. Cruel Competition challenges The Art Institutes students in fashion areas of study throughout North America to reinterpret and replace animal fur on runway looks by famous designers. This year’s finalists were selected from among more than 200 entries.

The Humane Society and The Art Institutes honored Zara, who graduated last fall with a diploma in fashion design, in an awards reception held last week in New York.

The Filipina designer earned the prize with her Fendi-inspired piece using faux-fur, faux-suede and polyester chiffon.

“I am extremely thankful, it hasn’t even sunk in yet,” Zara told the Asian Journal in an interview moments before the awarding. “I can’t believe that I am in New York and I am being honored in this event.”

The young designer also paid tribute to her Philippine-born parents – Ronilo and Lilibeth Zara – who inculcated in her the value of hard work.

“My dream now is to really be successful so I can buy my parents everything they want and need,” she shared.

As grand prize winner, Zara received an expense-paid, weeklong internship in New York City with fur-free designer Victoria Bartlett. Bartlett has judged the Cool vs. Cruel competition for the past two years and was the recipient of The HSUS’s 2010 Compassion in Fashion award.

“I’m amazed by the creativity of these future designers,” Bartlett said. “I’m hoping that in the coming years, more designers will begin making compassionate choices and move away from the cruelty of fur.”

“This program encourages fashion design students to make informed choices by educating them about the millions of foxes, raccoons and other animals who are killed every year for the fur trade,” added Michelle McDonald, fashion outreach manager of the fur-free campaign for The Humane Society of the United States.

The Humane Society of the United States is the nation’s largest animal protection organization — backed by 11 million Americans, or one of every 28. For more than a half-century, The HSUS has been fighting for the protection of all animals through advocacy, education and hands-on programs.

Zara’s family moved from the Philippines to Alberta, Canada when she was barely three years old.

Her parents toiled and worked double jobs to make sure that their family is comfortable and that the kids are sent to school to get proper education. Her father worked as a laboratory technician while her mother worked as a nursing aide.

“They were very supportive. My family is my inspiration,” she said. “Me and my two sisters saw how our parents worked really hard, and that made us all the more driven to work hard in our chosen careers.”

For now, Zara shares that her parents are happy that their three daughters are doing what they love the most. One of her sisters is in business, the other in medicine. While there may have been an initial negative reaction when she decided to pursue a career in fashion, Zara said it dissipated when her parents saw how passionate she was in becoming a great fashion designer.

From a young age, drawing had always been a die-hard passion for Johana. At seven years old, she made her very first sketchbook – just a binder of blank white paper and scraps — and found herself sketching her favorite cartoon characters. As much as she enjoyed drawing, she said she could not draw a Pokémon, or a Sailor Moon character without a photo reference. She had to copy it and said she was good at copying detail for detail.

But she desired to create her own work despite lacking in ability. Johana struggled with putting what she imagined and envisioned in her mind onto paper.

It was not until years later that she realized that what she was trying to draw was the world’s perception of those people, places, and objects, and not her own. So she thought to herself: what was she good at creating without the help of a photo reference?

The answer came so clear to her when she began designing clothing.

“The feeling that I get when my own idea falls on paper and transforms into a unique Johana Zara garment is unreal – euphoric even. There have sometimes been struggles in this work but that occasional euphoria makes it all worth it,” she shared.

As a fashion designer, Zara said she continues to get inspired by things around her. Asked what her win meant, she said the win came at the right time.

“This means a lot to me as I just decided to focus on fashion design this year,” Zara said, describing her win. “My passion for sketching and creating came out through this competition and winning makes me feel that design is the right route for me.”

She still gets giddy that she is back in New York after her first visit, when she worked as an intern to designer Victoria Bartlett. Through her one week stint, she saw the various sides of the business, from design to manufacturing. It didn’t help that it happened in New York, a city she wanted to experience when she was still in Vancouver.

“It’s crazy, I still can’t believe I am here. It’s my second time here in New York. I just love the energy,” she said, soaking it all in.

Zara is thankful to her school, The Art Institute of Vancouver, for opening the doors and for the practical, hands-on experience she had while building her portfolio of work. Who knew that a simple school project would bring her to places she just dreamt of?

“I was immediately inspired by Fendi. The immediate vision I had for my garment was a knee-length coat with an empire waist,” she said.

With one foot into the door, Zara is looking forward to more years in the fashion industry. For now, she just wants to further hone her craft.

“I want to learn more, and eventually, years from now open my own store. I want to do women’s wear first and maybe men’s wear and kids’ wear too,” she shared.