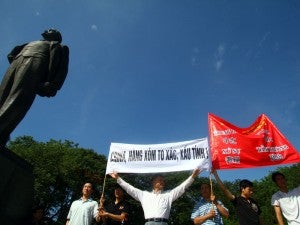 People hold slogans next to a statue of Vladimir Lenin near the Chinese Embassy in Hanoi, Vietnam. Hundreds of demonstrators gathered Sunday in Vietnam's capital in a rare protest demanding that China stay out of their waters following a spat involving a Vietnamese oil-drilling research boat in the South China Sea. AP

BEIJING—China demanded that Vietnam stop “all invasive activities” after accusing it of illegally entering its waters and endangering Chinese fishermen’s lives in an escalating dispute over territory in the West Philippine Sea (South China Sea).

The verbal clash with Vietnam follows a slap down of the Philippines in another area of the West Philippine Sea, where China and a handful of countries are eyeing rich oil and gas reserves.

The disputes have marred China’s relations with its neighbors and pulled in the United States, which considers some of China’s sea claims as international waters.

The Chinese Foreign Ministry issued its warning to Vietnam late Thursday, hours after Vietnam said a Chinese fishing boat supported by two patrol vessels had damaged the exploration cable of a state-operated seismic survey boat off the central Vietnamese coast.

Vietnam said it was the second time China had hindered the operation of an oil and gas exploration boat in two weeks, adding that its actions were “completely premeditated” and accusing it of flaring regional tensions in the South China Sea.

Hanoi says both incidents occurred well within the 200 nautical miles guaranteed to Vietnam as an exclusive economic zone by international law.

In the statement, ministry spokesman Hong Lei said the Chinese fishing boat crew had instead been in waters around the Spratly Islands, which are claimed by China and Vietnam and some other Asian nations. He said the crew had merely been protecting itself after being dragged backward for over an hour by a Vietnamese oil and gas exploration vessel — one, he said, that was “illegally working at the scene.”

“The claims made by Vietnam are complete misrepresentations of the truth. As is known to all, China has indisputable sovereignty rights over the Spratly Islands and the waters nearby,” Hong said.

“It needs to be pointed out that in illegally exploring for oil and gas and forcing out Chinese fishing boats from the Wan’an bank of the Spratly Islands, Vietnam has seriously violated China’s sovereignty and maritime rights,” he said.

On Thursday, China denied an allegation by Filipino officials that Chinese forces had intruded into Philippines-claimed areas around the Spratly Islands six times since February and of firing shots at least once. Beijing said it would use violence only when attacked.

Although the tension is unlikely to escalate beyond a war of words, the conflict could draw in the United States, which worries that the disputes could hurt access to one of the world’s busiest sea lanes. US Secretary of State Hillary Rodham Clinton said last year that the peaceful resolution of disputes over the Spratly and Paracel island chains was in the American national interest.