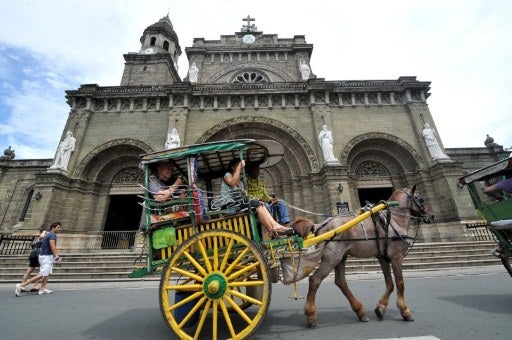 MANILA, Philippines—After enduring wars, earthquakes, fires and poverty-driven neglect, the walled city of Intramuros that makes up the Philippine capital’s historic center may rise again as a tourist attraction.

Government planners see the UNESCO World Heritage listed but famously dilapidated site becoming one of Manila’s biggest drawcards, similar to Singapore’s Clarke Quay but with the added color of centuries of history.

“We’re going to make this the ‘in’ place to be,” said Intramuros Administration chief Jose Capistrano.

“It will be a living Intramuros with tabernas and tapas,” he said, referring to Spanish-style restaurants and their signature finger snacks.

The ambitious project will involve rehabilitating and reconstructing buildings, as well as developing a riverside area called the Maestranza Park into a mall for upmarket restaurants and shops.

But this endeavor will require tens of millions of dollars in investments which the cash-strapped government cannot afford, so it is hoping the private sector will sign up.

Administration officials have been meeting with some of the country’s real estate giants to drum up their interest in investing in the project, and Capistrano said their reactions had been very favorable.

“They are interested in the projects. We feel confident that they will be coming in,” he told Agence France-Presse.

Capistrano said that, although a definitive cost estimate for the renovation had not yet been finalized, the potential investors were not intimidated by the large scope of the project.

“No one said it might cost too much. The reaction when we tell them what these projects are has been very good,” he said, adding he hoped to start a bidding process by the end of the year.

The 64-hectare (158-acre) Intramuros area, whose name literally means ‘within the walls’, served as the heart of Manila’s political, religious and cultural life from its founding by Spanish colonial rulers in 1571.

Its 4.2-kilometres (2.6 miles) of walls surrounded most of the government’s offices as well as major churches, schools and trading centers during the three centuries the country was under Spanish rule, which ended in 1898.

It was designed with walls, gates and gun emplacements to protect the Spanish residents from the Filipino masses, as well as guard the mouth of Manila’s main river, the Pasig.

Chinatown was also famously placed within cannonball distance of Intramuros so the Spanish could fire down on the Chinese traders whenever they became too troublesome. 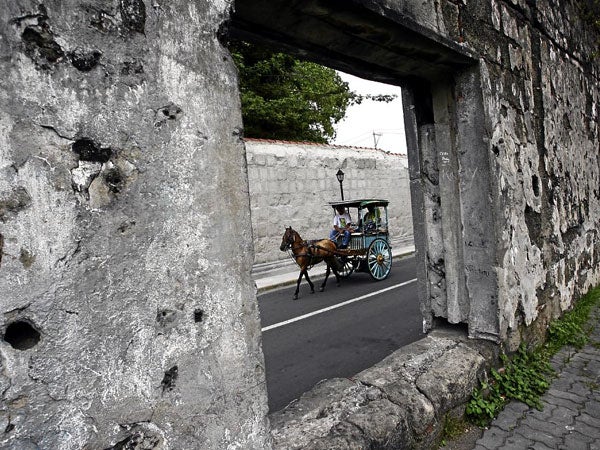 But Intramuros started falling into decline after the Spanish left, with most of the damage occurring during World War II when US forces shelled Japanese troops hiding inside the walls.

Many historic buildings, including nine of the 10 churches within Intramuros, were destroyed in the war. Some of these derelict structures are still standing, a reminder of the area’s lost grandeur.

Over the centuries, earthquakes and fires have also taken their toll.

And while Intramuros’s value is in its history, modern pressures have continued to erode its structures.

Parts of Intramuros today include a busy commercial and government district, containing several government offices, four major universities and a variety of businesses.

All of this results in congestion, noise, frequent traffic jams and a chronic lack of parking space.

The area also houses more than 3,000 families of squatters who often can be seen asking tourists for alms while their shanties and graffiti mar the image of the walled city, according to Capistrano.

He said the administration had limited power to evict the squatters. Many of them are on private property and are protected by laws designed to help the urban poor.

Tourism professionals operating in the area look forward to the upgrade but question whether the government can deliver amid the deterioration, overcrowding and squalor that have become common in parts of Intramuros.

“We need restructuring of the buildings, getting rid of the slumdwellers, beautifying the place. There is so much garbage, there are eyesores,” said Jose Mananzan, head of the Intramuros Tourism Council.

Nevertheless, even without private investors, the government has taken the first step, spending P150 million ($3.5 million) to turn the ruined shell of a church into a museum housing religious artifacts, Capistrano said.

Portions of the old historic wall in Maestranza that were torn down in the 1900s have also already been reconstructed through a Japanese grant, he said.

This time, instead of housing gunpowder and cannon balls, the wall’s vaulted inner chambers will hopefully house cafes and shops.

More restoration work is underway at the Intramuros’s garrison of Fort Santiago, where workers trained under a Spanish government grant are pulling down cement walls and replacing them with more authentic adobe and lime.

Under the Spanish program, two masons from Mexico taught the Filipinos how to mix lime and shape stone to recreate the original look of the building, which will become the new Intramuros visitors’ center.

“We replaced the old timber that had rotted but we are bringing it back to its original look,” said the workers’ foreman, Jose de Lara.