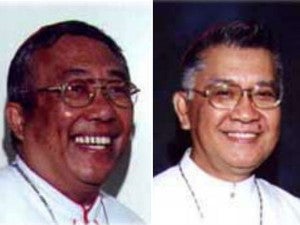 MANILA, Philippines—If praying the “Oratio Imperata” has seemingly spared the country from many typhoons, drought and deadly diseases, it may also work to help diffuse the tension between the Philippines and China over oil-rich Scarborough Shoal.

Two Catholic archbishops on Monday said it was high time the Catholic Church seriously considered issuing an Oratio Imperata for the peaceful resolution of the ongoing standoff between the two countries claiming rights over the shoal.

Lipa Archbishop Ramon Arguelles pointed out that an Oratio Imperata is a powerful prayer that has helped the country overcome crises and has spared it from numerous disasters in the past.

“There should be an Oratio Imperata on the conflict over Scarborough Shoal [because] quarreling won’t solve anything,” Arguelles, also former chairman of the Catholic Bishops’ Episcopal Commission on Military Ordinariate, said over Church-run Radio Veritas on Monday.

The senior prelate said his archdiocese in Lipa was already reciting a prayer for the amicable settlement of the dispute, adding that it would not do the Philippines good if it were to engage such a giant country in a fight.

“We should show China that we are a Christian nation and it is peace that we are promoting,” said Arguelles. “Prayers are the most effective tool for this kind of problem. Our history as a nation has proven and tested that many times.”

An Oratio Imperata is an ordered prayer for a special intention besides the ones prescribed by ritual that the pope or the bishop of a diocese may require to be said during Holy Mass.

There are different kinds of Oratio Imperata, which can be said either for civil disturbances or deliverance from calamities or illnesses.

In the past, the Catholic Church has issued a nationwide Oratio Imperata seeking the heavens for rain to save the country’s farmlands from drying up during the onslaught of El Niño. A special prayer was also recited during Holy Mass at the height of the influenza A (H1N1) virus outbreak in 2009.

Jaro Archbishop Angel Lagdameo also agreed that an Oratio Imperata in relation to the ongoing conflict with China was in order but he stressed that the CBCP Permanent Council must also give it some serious study before issuing one.

Lagdameo said the standoff at Scarborough Shoal (which the Philippines refers to as Panatag Shoal), believed to be rich in natural gas and oil, was a political matter so the Permanent Council must talk first. He also strongly recommended that the council appoint only one spokesman on the matter to avoid conflicting statements from bishops on the issue.

But the former president of the Church hierarchy stressed that the situation between the Philippines and China needs divine intervention through a powerful prayer recited together by the faithful.

“A collective prayer is truly needed … prayer power has been proven in EDSA 1,” said Lagdameo, also over Radio Veritas, on Monday.