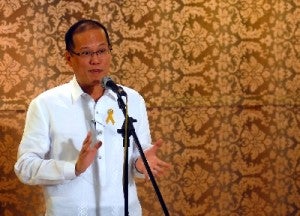 That does not mean, however, that the Philippines recognizes the Chinese ban on fishing in the South China Sea, which Manila calls West Philippine Sea.

The Department of Foreign Affairs (DFA) said it supported the President’s decision to ban fishing at Scarborough Shoal, which the Philippines calls Panatag Shoal, as overfishing had damaged the environment in those waters.

But Foreign Secretary Albert del Rosario said that the country does not recognize Chinese prohibition “as portions of the ban encompass our exclusive economic zone.”

“However, the President has decided that, in view of the accelerated depletion of our marine resources, it would be advisable for us to issue our own fishing ban for a period of time to replenish our fish stock,” Del Rosario said in a statement released Monday.

Talking with reporters after a speech on rural development program in Mindanao, Aquino answered in the affirmative when asked if Filipino fishers would be asked to skip fishing at Scarborough Shoal.

“Yes,” Aquino said. “And the [Bureau of Fisheries and Aquatic Resources (BFAR)] is supposed to be using some device that will improve fishing conditions elsewhere for our fishermen, especially those from Masinloc in the Zambales area and some from the Pangasinan area.”

China is enforcing the fishing ban in the South China Sea beginning Wednesday to conserve resources and curb overfishing. The prohibition runs up to Aug. 1.

The official Xinhua News Agency cited a South China Fisheries Administration Bureau official on Sunday as saying the ban includes waters around Huangyan Island, China’s name for Scarborough Shoal, where Philippine and Chinese vessels have been standing off over sovereignty since April 10.

The fishing prohibition also covers foreign fishers, including those from countries with rival territorial claims in the Spratly Islands, an archipelago in the South China Sea believed to have vast mineral and gas deposits and straddled by sea lanes vital to global trade.

The ban, however, does not cover all of the Spratlys but only areas north of 12 degrees north latitude, including Scarborough Shoal.

Xinhua said the ban had been imposed annually since 1999. Since 2009, it has been imposed starting on May 16 and ending on Aug. 1.

Aquino said that unlike Filipino fishermen, who use motorized outriggers, China fishers use huge trawlers at Scarborough Shoal.

“Now, vessels and personnel of our Coast Guard and the [BFAR] continue to monitor the [harvesting by Chinese fishers] of giant clams. And if they will impose the ban on their countrymen who are doing the harvesting, why wouldn’t we welcome that ban?” Aquino said.

“Panatag Shoal would be able to recover,” he said. “So thank you if they will impose the ban on their people because, as a matter of fact, only a few of our fishermen go there,” he said.

The President said the Coast Guard and the BFAR had reported ecological damage to Scarborough Shoal, “something about the discoloration of the water.”

“I’m not a marine aquaculturist so I’m not that conversant with the details,” the President said. “But there seems to have been damage already inflicted so when there’s damage, we want to help the ecosystem recover, and a ban would help in the recovery process.”

The President indicated that there were positive developments in the negotiations with China to end the Scarborough standoff.

“The negotiations didn’t stop … It’s still too early to say that the situation has become better but, at least, we’re a bit close to the improvement of the situation and resolving this using diplomatic means,” Aquino said.

The Philippine Coast Guard said it was ready to enforce a fishing ban, but had yet to receive orders from the authorities.

“So far, the standing order is to maintain our ship’s presence and to show our flag,” Supangan said.

As of 9 a.m. on Monday, Supangan said, there were four Filipino fishing boats and a BFAR vessel, the MCS-3008, in the Scarborough lagoon. The Coast Guard’s BRP Pampanga, a search-and-rescue vessel, was in the area but not in the lagoon, Supangan said.

On the Chinese side, there were 11 fishing boats, two maritime surveillance vessels, and another craft from China’s Fleet Law Enforcement Command, Supangan said.

The Chinese do not stop Filipino fishermen from going into the lagoon, Supangan said.

Both the Coast Guard and the DFA were awaiting details of the Chinese fishing ban. The details of the ban, which should be shown on a map, would show the extent of China’s territorial claim in the South China Sea.

Those are Stewart Bank and Truro Shoal, located west of Ilocos Sur and Pangasinan, respectively, where Filipino fishermen also go.