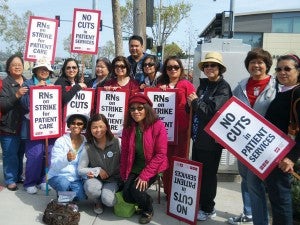 SAN LEANDRO, Bay Area, California—For the third time in less than a year, the California Nurses Association (CNA) staged a one-day strike on May 1 at eight hospitals of the Sutter Health chain in the Bay Area to protest alleged cutbacks in medical services, proposed reductions on hospital workers’ benefits, and deterioration of working conditions.

“The ongoing cutbacks in services and proposed reductions in our benefits and deterioration in our working condition by Sutter are unthinkable at this time especially since they, supposedly a non-profit health system, are earning not just a measly profit,” rued Vicky Mendoza, a Filipino registered nurse who is part of the bargaining team for a new contract. “Our contract expired last summer but up until now we still don’t have a contract.”

CNA protesters said that Sutter Health continues to compromise health services to patients, even as the company reported earning some $4 billion in profits since 2007.

In a news release, CNA berated Sutter for proposing conditions that would effectively 1)force nurses to work when sick, dangerously exposing already fragile patients to infection and further complications; 2)effect thousands of dollars in increased costs to nurses for health coverage for themselves and their families; 3)force many nurses to work in hospital units for which they do not have clinical expertise, thus posing a risk to patients, and 4)impose huge cuts for nurses who work part time schedules.

Said Mendoza to FilAm Star:  “We are amenable to the extension of our contract as it is now without any demand for increased wages and benefits from us, as long as there will be no takeaways. But they are demanding cutbacks in our sick leaves, health benefits and our vacations.”

Mendoza also cited that among those Sutter management wants to abolish is the 3/5 position, as it refers to nurses working three days a week but are earning benefits. According to her, Sutter now only wants either part-time employees (without benefits)  or full-time workers.

Of the 3/5 employees that would be affected, many are Filipinos, who, in San Leandro Hospital alone, comprise some 55 to 60 percent of the workforce spread in various departments such as housekeeping and kitchen. Majority of the nurses in that East Bay facility are also Filipinos.

“San Leandro Hospital may be a small community hospital but if they close this down, some 30.000 patients we attend to yearly in the emergency room alone would be deprived of medical services,” Mendoza said.

Asked on their next moves after the one-day strike, Mendoza told FilAm Star they will just keep fighting for what they believe in and will not be giving up on issues like the closure of San Leandro Hospital and the takeaways in their benefits.