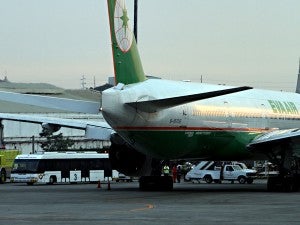 EMERGENCY LANDING. Airport personnel attend to the EVA AIR Flight BR226 which executed an emergency landing at the Ninoy Aquino International Airport Terminal 1 Wednesday after the pilot radioed the control tower about a smoke coming from inside the cockpit. The plane was enroute to Singapore from Taipei. GRIG C. MONTEGRANDE/Inquirer

MANILA, Philippines — A Singapore-bound commercial aircraft made an emergency landing at the Ninoy Aquino International Airport Wednesday afternoon due to a technical problem.

The plane’s pilot reportedly noticed smoke coming from the cockpit.

Initially, the plane’s pilot called the Manila Tower at 4:16 p.m. and requested for an emergency landing, Agustin said.

“But at 4:48 p.m., the pilot shifted or downgraded its request from Plan 2 (emergency landing) to Plan 3, which means that the aircraft has reported experiencing difficulty but has not yet requested for an emergency landing.. It means all emergency personnel are just on standby,” Agustin said, adding that there were no reported injuries during the incident.