MANILA, Philippines—The Philippine Consulate General in San Francisco held a special screening of the documentary film “Forgotten Soldiers” on April 12 in commemoration of “Araw ng Kagitingan” and the 70th Anniversary of the Fall of Bataan.

The full-length documentary was produced and directed by Filipino-American Donald Plata, written by Chris Schaefer and narrated by Lou Diamond Philips, the Philippine Consulate said.

Using photographs, re-enactments, actual footages and accounts by survivors, the film depicts key events in the Philippines during World War II—from the defense and fall of Bataan and Corregidor until the defeat and surrender of the Japanese Imperial Armed forces. 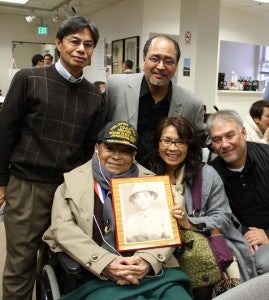 Present during the screening at the Philippine Center’s Social Hall, were Philippine Scout Pablo Mesina, a survivor of the Death March, as well as family members and descendants of Philippine Scouts and World War II veterans. They were joined in by various sectors of the Filipino-American community in the Bay Area.

Deputy Consul General Alfonso A. Ver, meanwhile, extended the appreciation of the Philippine Consulate General to Plata and Schaefer for the opportunity to screen their film in San Francisco.

Before the screening of the film, Bob Capistrano gave a brief background about the Philippine Scouts Heritage Society where he works as a historian. Meanwhile, Ron Muriera of the Santa Clara Valley Chapter of the Filipino-American National Historical Society and the official representative of Plata and Schaefer, introduced the film by reading a special message from the director and writer.

Plata and Schaefer thanked those who came to the screening noting that many of them were relatives of World War II veterans who fought in the battles of Bataan and Corregidor. They added that the film was about the US Army’s Philippine Scouts who fought during the war but were often overlooked in the history books. These soldiers, along with soldiers of the Philippine Army, held off Japanese forces for four months during the beginning of World War II, the director and writer said in their statement.

Plata and Schaefer also said they dedicated the film to the memory and bravery of the soldiers who fought in Bataan and Corregidor.