Aquino: We’re not going to war with China 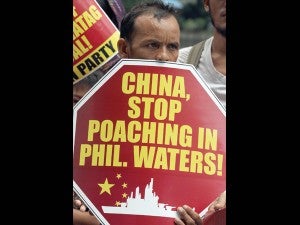 GET OUT Activists stage a protest in front of China’s consular office in Makati City on Monday demanding the immediate pullout of Chinese vessels from Scarborough Shoal in the West Philippine Sea. NIÑO JESUS ORBETA

Stressing that he did not intend to go to war against China, President Benigno Aquino III said on Monday he was attempting to ease tensions at Scarborough Shoal by deploying a Coast Guard cutter in the area to match Beijing’s civilian vessel there and continuing talks with Chinese diplomats.

“It would be difficult if we are not talking anymore,’’ the President said. “It’s better to jaw-jaw than to war-war,’’ Mr. Aquino told reporters, quoting the late British Prime Minister Winston Churchill.

In a hastily called news conference in Malacañang to respond to  widespread criticism of his handling of the power crisis in Mindanao, the President explained for the first time the actions taken by his government on the week-old standoff at the shoal whose resolution, he said, was a “work in progress.’’

Mr. Aquino said the government had no intention to escalate tensions at the shoal when it sent its Navy warship, the BRP Gregorio del Pilar, there last week.

Using a PowerPoint presentation, the President explained that the Navy flagship was en route to the eastern coastline of northern Luzon to stand vigil there in case debris from the April 13 launch of a North Korean missile fell there.

“On its way there, it was informed by a Navy aircraft that it spotted fishing vessels and [since] part of its duty is to enforce our maritime laws, it inspected [the vessels] and found these endangered species,’’ he said, referring to poached marine life aboard what turned out to be Chinese craft.

He said the Navy frigate left the area immediately upon the arrival of a Philippine Coast Guard search and rescue vessel, which he described as a “civilian component’’ under the Department of Transportation and Communications and which was dispatched “just to demonstrate that we want to de-escalate the situation.’’

On Monday, he said PCG vessel 003 was replaced by PCG vessel 002 so that it could refuel and take on provisions like water. “We don’t have replenishment at sea capabilities,” he said.

“So 002 will maintain station to assert our sovereignty over Scarborough Shoal, which is about 160 nautical miles (296 km) from our coastline and which is well within our exclusive economic zone,’’ the Chief Executive said.

When a reporter pointed out to him that authorities were unable to arrest the Chinese poachers and confiscate the items they got, the President shot back:  “Will it be better for us to deploy all our maritime vessels there, prevent Chinese maritime surveillance vessels that are unarmed and force China to react by sending their own military vessels?’’

“Would escalation serve the national interest?’’ he  asked, adding that the two sides had not stopped exploring all avenues to resolve the impasse. “We have two missions: One, not to escalate the situation and two, to protect our sovereignty,’’ he said.

The President also dismissed speculation about the timing of the annual Philippine-US Balikatan exercises, which started Monday, amid the standoff at  Scarborough Shoal, a cluster of reefs and islets surrounding a lagoon that is being claimed by China. The area is separate from the Spratlys, which are being disputed by the Philippines and China, along with Vietnam, Taiwan, Malaysia and Brunei.

“It will not serve us any good that at a time that we are trying to de-escalate the situation, we will put in place something that will potentially be a subject of complaint of the other side,’’ he said.

While he said his government was prepared to protect the country’s sovereignty “to the limits of our capabilities,” he stressed that the Philippines did not have the resources to fight the Chinese, “even in boxing, they are 1.3 billion, we are 95 million.”

The President noted a provision in the Constitution that “we renounce war as [an] instrument of national policy and I am bound to follow that.’’

That’s why he said it was important for the two nations to continue with their dialogue, now being conducted between Foreign Undersecretary Erlinda Basilio and Chinese Ambassador Ma Keqing, because Foreign Secretary Albert del Rosario was now in the US on a previous engagement.

“I’m hopeful that reasonable people … can come up with a situation that will resolve the situation,’’ Mr. Aquino said.

Basilio and Ma held discussions for 45 minutes Monday afternoon. The Chinese ambassador declined comment on the outcome of the talks but her political counselor Bai Tien, told reporters, “No breakthrough.”

Hernandez also announced that the Philippines on Monday lodged a diplomatic protest over “acts of harassment” by Chinese ships and aircraft of the MY Saranggani, a Manila-based vessel doing archeological research in the shoal area last week.

In a news conference earlier, Hernandez shrugged off suggestions by Senator Joker Arroyo that the Philippines had become an “orphan” that could not depend on the United States or its partners in the Association of Southeast Asian Nations to protect its territory against Chinese intrusions.

“Our regional and international partners, including the United States, our treaty ally, are assisting us upgrade our capabilities and build a minimum credible defense posture,” Hernandez said. With a report from Jerry E. Esplanada

Read Next
PH files protest vs Chinese harassment of research boat in Scarborough Shoal
EDITORS' PICK
Smart poised to turn PH into ‘Smart 5G country’ with nationwide rollout
Water remains our saving grace right now
Get 80% OFF Ignite 2020 Cyber Tickets starting 28 September
House to probe Facebook takedown of gov’t accounts
Feud is over: Velasco next Speaker on Oct. 14
Duterte meets with Cayetano, Velasco amid speakership issue
MOST READ
Velasco to take over as Speaker on Oct. 14
2 PDP-Laban allies in House jump over to Lakas-CMD
LOOK: The Mountain from ‘Game of Thrones’ welcomes first son with wife
Gun attack in PMA: Air Force man killed, 2 others wounded
Don't miss out on the latest news and information.