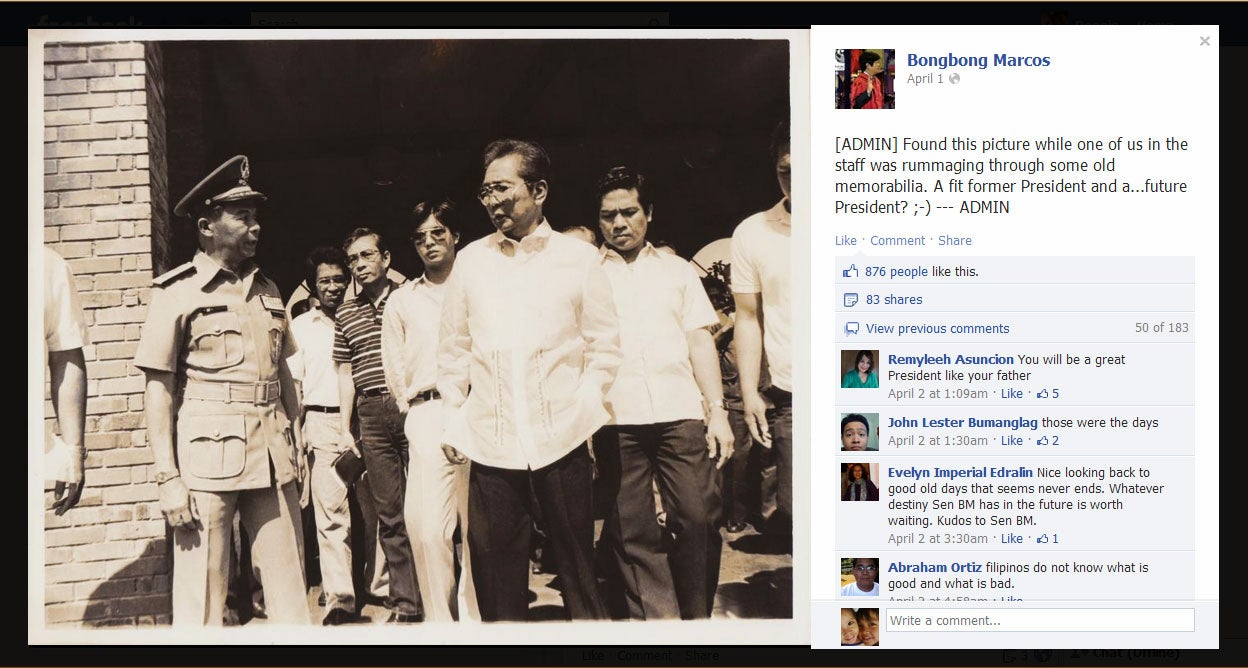 SAN FRANCISCO—The photo shows Ferdinand Marcos at the height of his power. The dictator is surrounded by aides, and behind him, his only son, Ferdinand Jr., known as Bongbong.

The caption on the photo posted on the “Bongbong Marcos” Facebook page  reads: “A fit former president and a … future president? ;-)”

You can check out the Facebook page here. You can see how the old photograph sure got fans of the late dictator and Bongbong excited.

In that little corner of cyberspace, a Marcos loyalist heaven.

“President Ferdinand Marcos was the best. No one can match or surpass him except for his son, Senator Ferdinand Jr.,” another said.

Referring to Bongbong, one chimed in, “You will be a great President like your father.”

And they kept on going, creating one grotesque Marcosian lovefest.

“we must bring back the golden age of the Philippines.”

“No doubt the best president ever. Philippines lucky to have him history gave him justice and please there is a comparison now.”

“My President, My Hero. He is the type of President that will do everything in his might to make the country strong. … Mr. Senator Bongbong Marcos, I will pray to GOD, that if ever you decide to run for President, GOD will lay His hand upon your head to lead our country for Good.”

“It’s only fitting that a Marcos will once again bring back the glory days and golden age of the Philippines.. Bongbong Marcos for President!!!”

We will mark the 40th anniversary of the declaration of martial law this September. It’s been more than a quarter of a century since that nightmare ended.

Memories fade. Some are twisted around and distorted. And clearly, some of the distorting and the twisting around are happening in social media.

The kooky propaganda line goes something like this: ‘They say Marcos was a bad leader. Well, look at all the problems the country still faces today.’

They point to the failures of the presidents who came after the dictator was overthrown.  No mention of the one important point about Marcos: he wanted to be in power forever. And he tried everything to stay in power forever.

I’ve said this before. But it’s worth repeating:

Democracy – and Philippine democracy in particular – can never be a perfect system. There’s no such thing as a president who can fix the country’s problems with one stroke.

We will have bad leaders and good leaders, smart leaders and dumb leaders, inspiring leaders and leaders who would make us ask collectively, “How in the world did this joker get elected president?”

And yep, this also happens in older democracies like the United States.

But the rule in a democratic system is clear: ‘All right, you got elected, you’ve served your term. Now your term is up. Step aside and let someone else serve.’

Well, Marcos didn’t buy into that core principle of democracy. He found it inconvenient.

The dictator, like other tyrants, wanted it all – and he wanted all of it forever. As a result, we lived through 14 years of bullying, stealing and lying. Fourteen years of a delusional, destructive dictatorship.

Bongbong Marcos is not his father. He should not be blamed for the terror we endured under dictatorship.

We hope he’d acknowledge what happened. But that’s probably not going to happen.

Still, I imagine he could probably manage to make a statement that goes something like this: ‘I know many people criticize him. But he was my father. I will always honor his memory.”

That’s acceptable. I’d even defend his right to say that, in the same way we should defend any Filipino’s right to honor one’s parents and family.

But Bongbong is a political player now, one with presidential ambitions.

How can we accept a political figure who says the Marcos years were the best thing that ever happened to the Filipino nation?

What kind of leader would glorify a brutal regime? What would that leader do, how would he govern once he’s in power?

And it’s also an entirely different story if, in honoring his father’s memory, Bongbong also spits on the grave of those who fought and even died in the fight against dictatorship – if he demeans the memory of those who sacrificed much so that our democracy can be restored.

That’s what he did when he arrogantly dismissed the Edsa uprising as a failure.

That’s what he did when he suggested that those who opposed the dictatorship caused the country to suffer more because if they had not fought his father’s regime, the country would have become an economic miracle.

And one of his key arguments is simply mind-boggling: That the Philippines could have turned into another Singapore, known as one of the least corrupt nations in the world, under a president now considered one of the most corrupt in world history.

But then again, we shouldn’t be surprised.

The Filipinos of my generation, the martial law babies, and those who came before use, shouldn’t fret. For history doesn’t always move in a straight line.

After the fall of the Nazis came the neo-Nazis, and many more battles against extremely violent racism. It took decades for the Civil Rights movement in the United States to score important victories for African Americans and other minorities – victories that must be defended and nurtured to this day.

We prevailed in defeating dictatorship. Now there’s another challenge: Defending the memory and the stories of those whose sacrifices made that victory possible.

Fortunately, there are many who doing just that. The dictators’ followers aren’t the only ones using Facebook.

The “[email protected]” is asking Filipinos worldwide not to forget.

The cultural group called Canvas, led by executive director Gigo Alampay, just  launched a campaign asking parents who survived martial law to write a letter to their children on the nightmare we endured under Marcos. It’s a creative campaign and I encourage everyone to join. You can check it out here.

And even on the Bongbong Marcos page on Facebook, there are voices of dissent.

And there’s this from another reader: “When will we ever learn? let history repeat itself? no way.”