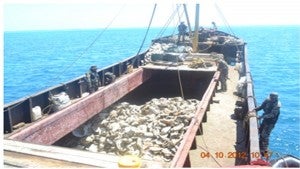 Foreign Secretary Albert Del Rosario already met with Chinese ambassador Ma Keqing earlier Wednesday but both sides have claimed the area and both advised the other to leave their territory, leading to an impasse.

Navy Vice Admiral Alexander Pama said in a televised press conference with the Department of Foreign Affairs Wednesday that on April 8 around 6:30 in the morning, a Philippine Navy aircraft reported the presence of eight unidentified foreign vessels at Scarborough Shoal.

In response, the BRP Gregorio Del Pilar went to the location to inspect the reported intrusion of foreign vessels, Pama said.

At 3:26 in the morning of April 10, the BRP Gregorio Del Pilar confirmed the presence of eight Chinese fishing vessels anchored within the shoal.

A boarding team was sent to conduct inspections on one of the vessels at around 7:20am and found “large amounts of corals, sizable quantities of giant clams, and live sharks in its compartments,” Pama said.

Endangered marine animals gathered by Chinese poachers are shown in this handout photo from the Philippine Navy.

The fishing vessels were likewise found to be all manned by Chinese nationals and had equipment “purposely to perform illegal fishing activities and poaching,” Pama said.

When the Philippine Navy finished inspecting the vessels at around 2:20 in the afternoon, the “preparations were undertaken for the appropriate action in accordance with our laws,” Pama said.

Around two hours after they boarded the Chinese vessels “two Chinese maritime surveillance vessels” appeared and moved towards the shoal, Pama said.

The “Chinese maritime surveillance vessels” maneuvered itself in between the fishing vessels and the BRP Gregorio Del Pilar.

Pama said that Chinese vessel contacted the BRP Gregorio Del Pilar and “advised [it] to leave the area and asserted that it was intruding into Chinese territory.”

The Captain of the BRP Gregorio Del Pilar in response told the Chinese vessels that Scarborough Shoal was not Chinese territory and that it was within the Philippines’ 200 nautical mile Exclusive Economic Zone.

“This resulted to the standoff which is still ongoing even as we speak,” Pama said.

The DFA has said that they will keep trying to solve the issue diplomatically.