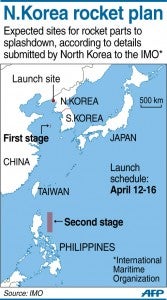 NORTH KOREA ROCKET PLAN. North Korea has said the rocket will travel south towards the Philippines or Indonesia.

PYONGYANG, North Korea—North Korea was injecting liquid fuel Wednesday into the rocket it intends to send into space soon, a launch that the West deems provocative but that Pyongyang considers a peaceful centerpiece to celebrations marking the 100th anniversary of the nation’s founder.

The final preparations at the west coast launch pad were taking place as North Korea’s ruling Workers’ Party convened for a special conference. Delegates are expected to further elevate new leader Kim Jong Un by giving him new titles, including some held by his father, the late Kim Jong Il.

The conference, being held at an undisclosed location in Pyongyang, is one of two major political gatherings this week that are expected to formally install the young Kim as North Korea’s supreme leader. Two days after the political conference, the Supreme People’s Assembly will gather to ratify new legislation.

Such conferences also are watched closely for signs of changes in leadership. With two spots vacant on the Central Committee’s Political Bureau following the deaths of Kim Jong Il and a high-ranking military official, Kim Jong Un was among those anticipated to be promoted to standing member of the powerful policymaking body.

The events come as North Korea celebrates the April 15 centennial of the birth of Kim Jong Un’s grandfather, Kim Il Sung, a major milestone in the nation he founded in 1948.

North Korea has thrown open its doors to a select group of journalists and visitors from abroad for two weeks of celebrations in what might be the largest influx of foreigners in years. North Korea also marks the 80th anniversary of the founding of the Korean People’s Army, another key event, on April 25.

Space officials call the launching of the Unha-3 rocket, mounted with an Earth observation satellite, the crowning glory in a week of events meant to celebrate Kim Il Sung’s birthday.

The United States, Japan, Britain and others, however, see it as a provocation and violation of U.N. Security Council resolutions banning North Korea from developing its nuclear and missile programs.

Experts say the Unha-3 carrier is similar to the type of rocket that could be used to fire a missile mounted with a nuclear warhead to strike the US or other targets.

Paek Chang Ho, chief of the North Korean space committee’s General Command Center, denied Wednesday that the launch was anything but a peaceful, civilian bid to send a satellite into space. He said the satellite would send back images and data used for weather forecasts and agricultural surveys.

“Some parties insist our peaceful space program is a missile test,” he told foreign reporters taken Wednesday to the nation’s main satellite command center in the outskirts of Pyongyang. “We don’t really care what the outside world thinks. This launch is critical to developing our space program and improving our economy.”

“We are injecting fuel as we speak,” Paek told reporters from a viewing platform in front of a large screen showing the live feed. Sixteen scientists in white lab coats worked at computers below him. The central command center outside Pyongyang is where late leader Kim Jong Il and successor Kim Jong Un watched an April 2009 rocket launch, he said.

Because liquid rocket fuel is highly volatile and corrosive, its injection into the rocket is usually one of the final steps in the pre-launch process. But the weather, and particularly the wind, could force delays. North Korea’s announced launch window, provided to the International Maritime Organization, starts Thursday and runs through Sunday.

US Secretary of State Hillary Rodham Clinton said Tuesday that the launch would be a direct threat to regional security and that the US would pursue “appropriate action” at the Security Council if North Korea goes ahead with it.

This week’s satellite launch from a new facility in the hamlet of Tongchang-ri on North Korea’s west coast would be the country’s third attempt since 1998. Two previous rockets, also named Unha, were mounted with experimental communications satellites and sent from the east coast.

North Korean officials say the 2009 satellite reached orbit, but the US and other outside observers say they have seen no evidence that it did.