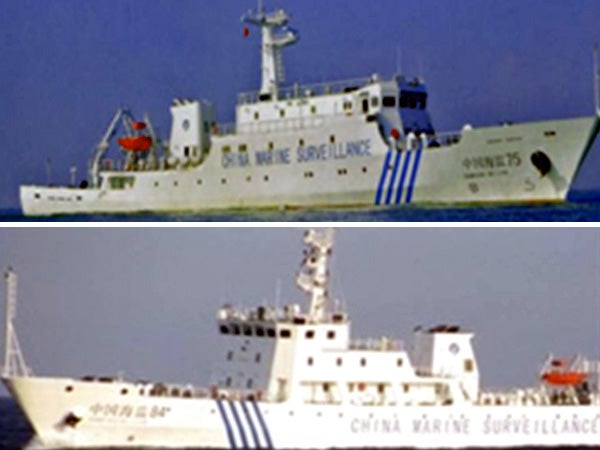 A view of Chinese surveillance ships in a standoff with a Philippine warship on the Scarborough Shoal after eight Chinese fishing boats were caught poaching in the disputed territory. The photo was presented by Vice Admiral Alexander Pama, flag officer-in-command, during a press briefing Wednesday April 11, 2012, at the Department of Foreign Affairs. PHILIPPINE NAVY HANDOUT

The Chinese embassy in Manila released a statement reasserting the country’s sovereign rights to the West Philippine Se, including the disputed area that is much closer to Philippine landmass.

The statement “urged the Philippine side to stop immediately their illegal activities and leave this area”.

The government said the standoff was occurring at Scarborough Shoal, 124 nautical miles from the western coast of the country’s main island of Luzon.

China insists it has sovereign rights to all of the West Philippine Se, even waters close to the coast of other countries and hundreds of kilometers (miles) from its own landmass.

“The Chinese Embassy hereby reiterates that Huangyan Island is an integral part of the Chinese territory and the waters around it is the traditional fishing area for the Chinese fishermen,” the statement said.

“Ever since the ancient times, numerous documents on the Chinese history have put down definitely in writing that Huangyan Island belongs to Chinese territory.”