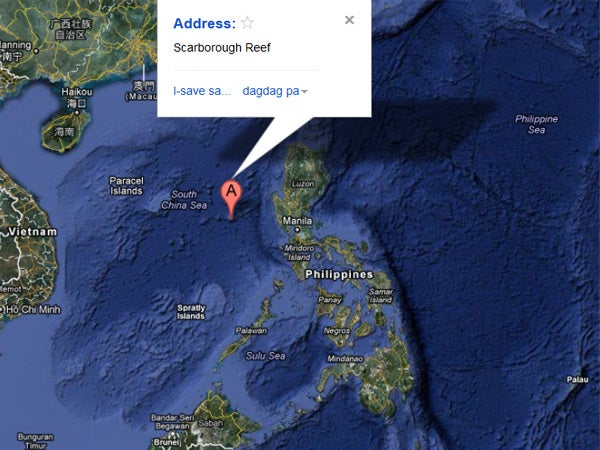 IN ROUGH WATERS. Google map of Scarborough Shoal where Philippine and Chinese Navy vessels are currently in a standoff after the alleged intrusion into the disputed territory by Chinese fishing boats.

MANILA, Philippines — A Philippine Navy ship and at least two Chinese vessels were locked in a standoff for a second day at the Scarborough Shoal on Wednesday after the Philippine Navy caught eight Chinese fishing boats poaching in Philippine waters and was about to apprehend them, the foreign office said.

It said Foreign Secretary Albert Del Rosario had summoned the Chinese Ambassador Ma Keqing to a meeting to resolve the problem diplomatically.

A statement from the Department of Foreign Affairs said the confrontation happened two days after a Philippine Navy surveillance plane found the eight Chinese fishing boats anchored inside the Panatag (Scarborough) Shoal on April 8.

According to the DFA, the Panatag Shoal is an integral part of Philippine territory.

“The Shoal is 124 nautical miles from the nearest basepoint in Zambales province. It is within the Philippines’ 200 nautical miles Exclusive Economic Zone (EEZ) and Continental Shelf,” the DFA said.

To protect the marine environment and resources in the Panatag Shoal and to assert Philippine sovereignty and sovereign rights over the area as a responsible coastal state, the Philippine Navy deployed the BRP Gregorio del Pilar (PF-15) from Palawan to Northern Luzon waters on the same day to conduct maritime patrol over the Shoal.

“In the course of its patrol, PF-15 confirmed the presence of the eight Chinese fishing vessels anchored inside the lagoon of the Shoal,” the DFA statement said.

The navy vessel remained in the vicinity of the shoal for continuous monitoring of the fishing vessels, it added.

In the morning of April 10, the BRP Gregorio del Pilar, in accordance with the established rules of engagement, dispatched a boarding team to inspect the fishing vessels and collect photos and other evidence of their catch.

“The inspection team reported that large amounts of illegally collected corals, giant clams and live sharks were found inside the compartments of the first fishing vessel that was boarded by the PN team,” the DFA said.

It added that the BRP Gregorio del Pilar later reported that two Chinese maritime surveillance ships identified as Zhonggou Haijian 75 and Zhonggou Haijian 84 managed to sail to the mouth of the shoal, placing themselves between PF-15 and the eight Chinese fishing vessels, thus preventing the arrest of the Chinese fishermen.

This situation has remained unchanged as of Wednesday morning, the DFA noted.

“To seek a diplomatic solution, Foreign Affairs Secretary Albert F. del Rosario communicated to Chinese Ambassador Ma Keqing in the evening of April 10 that the Panatag Shoal is an integral part of Philippine territory and the PN is enforcing Philippine laws on the Shoal, which is within the Philippine EEZ and Continental Shelf,” the DFA said.

Furthermore, Secretary del Rosario has invited Ambassador Ma to the DFA for further discussion of this issue, it added.

Zhang Hua, spokesman for China’s embassy in Manila, told Agence France-Presse on Wednesday he had no comment on the latest standoff.

The incident is the latest flare-up in tensions between the two countries over competing territorial claims to parts of the South China Sea, which is believed to sit atop vast oil and gas deposits.

China insists it has sovereign rights to all of the South China Sea, even waters close to the coast of other countries and hundreds of kilometers (miles) from its own landmass.

Apart from China and the Philippines, Taiwan, Malaysia, Brunei and Vietnam, also have overlapping claims to parts of the South China Sea, making the waters one of Asia’s potential flashpoints for armed conflict.