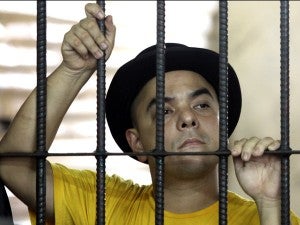 MANILA, Philippines—The last thing Filipino performer Carlos Celdran expected at the largest art fair in the Middle East was to be picked up by security officials, questioned, and ordered to remove political and religious references from his show.

“It never occurred to me this would be sensitive,” Celdran said of his act about former Philippine first lady Imelda Marcos, which was performed in Dubai to a backdrop of paintings and sculptures.

Celdran’s story takes place in the 1970s, when Imelda’s husband, Ferdinand, declared martial law and her developing nation became an unlikely player on the global stage — thanks to its relationship with the US, which considered it an important ally in the Cold War.

Imelda Marcos, who lived lavishly while others lived in squalor and in fear of her husband’s iron-fisted rule, used state-sponsored arts and culture to create an image that society was progressing.

Celdran said human rights and freedom of expression can often be compromised to push the agenda along when nations do that — whether by hosting an Olympics, a Miss Universe pageant, or an international arts fair.

“If there are any parallels to what’s going on in the Middle East, that’s up to you to find, not me,” Celdran said in a recent interview.

His was not the only case of censorship at the Art Dubai 2012 fair, which was held last month and attracted unprecedented interest in its sixth year largely because of the Arab Spring uprisings.

At least four paintings were taken down ahead of a visit by the emirate’s ruling family, including one depicting the beating by soldiers and police of an Egyptian woman, her blue bra exposed, in Cairo’s Tahrir Square.

Another was of a woman holding underwear with “leave” written across the front, the word often chanted by Arab Spring protesters during their demonstrations.

“It is common worldwide for the authorities to check exhibitions for particularly sensitive content when expecting royal visits,” she said in an email. “We had over 500 artists on show and we were asked that a gallery take down and store a minimal number of works.”

As for Celdran’s act, she said that security officials just wanted to talk to him, and that it was his decision, ultimately, to cancel.

She said she was not in the room during Celdran’s hourlong interrogation, and did not elaborate.

But Celdran said references to religion and politics raised the loudest alarm bells.

Imelda Marcos was famous for hobnobbing with Hollywood starlets and charming world leaders.

It was when Celdran ventured into the friendship Marcos had with Libyan strongman Moammar Gadhafi — whom she asked to stop supporting Muslim rebels in the southern Philippines and help broker a peace deal — that he was whisked away by a tall, robed man.

Just before Celdran was taken away, he had Marcos tell Gadhafi, “Islam is all about peace, and if you are funding a war in my country you are also pitting Muslim against Muslim.”

Celdran decided to cancel rather than revise his show.

But before leaving, he held a brief, impromptu performance, sitting on the floor of the exhibition hall with tape covering his mouth.

While he says he knows Dubai remains politically conservative and steeped in religion, he wishes that would have been part of a broader discussion.

“Everyone was ignoring the big elephant hanging over the room,” he said. “If you’re going to take away the Arab Spring, theocracy, intimidation, freedom of speech and other issues that are really relevant today, it becomes just a decorative fair.”

Celdran, known for stirring debate on public issues at home, was briefly jailed in 2010 for disrupting a Roman Catholic Mass in Manila to protest the clergy’s opposition to contraception.

But after some reflection about what he now calls his “own Mideast crisis,” he’s able to laugh. “I was just collateral damage of the Arab Spring,” he said.