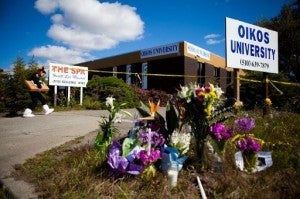 OAKLAND, California—The suspect in a shooting rampage that left a Filipina and six others dead at a California Christian university was on campus because of a tuition dispute, but previously had not shown any signs of violence, the school’s founder says.

One Goh became upset when administrators refused to grant him a full tuition refund after he dropped out of the nursing program last fall, Jongjin Kim told The Associated Press on Friday.

He said the South Korean-born man came to campus Monday morning looking for the person in charge of handling tuition. Goh hadn’t exhibited violent tendencies before that and seemed “normal,” Kim said.

Goh is charged with seven counts of murder and three counts of attempted murder with a special circumstance allegation that could make him eligible for the death penalty. He has not entered a plea.

Police said they had located a .45-caliber semiautomatic handgun they believe was used in Monday’s attack.

The weapon was found in the shallow waters of a tributary of San Leandro Bay, about a half-mile from the school. Its serial numbers match a gun purchased by Goh, city spokeswoman Cynthia Perkins said.

Police say Goh may have been seeking multiple targets before beginning his rampage, killing six students and Kathleen Ping, a Filipino school secretary, while wounding three others. Kim, now the school’s dean, was on campus at the time and believes Goh shot his victims at random.

Numerous administrators have said that Goh grew angry during one of three long meetings with officials over a financial dispute.

The amount in dispute was $4,000 to $6,000, according to Moon, who said officials had offered partial reimbursement.

During the meetings with school administrators, the 43-year-old Goh also complained that he didn’t get along with his classmates, so officials offered to transfer him to another classroom, Moon said.

They believed the issue was resolved and he would restart classes, but police say an angry Goh returned to the school on Monday.

Nursing program director Ellen Cervellon previously said she met several times with Goh over the tuition issue and that he said students had been picking on him.

Police have said Goh was targeting a female administrator when he went to his former school, and opened fire when he learned she wasn’t there.

Cervellon told the AP that she believed she was the intended target. But Police Chief Howard Jordan later said the main target was a woman who no longer works at Oikos.

At the Oikos campus, workers cleaned the building behind police tape Friday morning. A banner draped at the school’s front entrance read, “In Memoriam, Forever United In Life, April 2, 2012.” It listed the names of the victims, followed by the words: “We Will Remember. We Will Prevail.”

School officials moved a growing makeshift memorial from the side of the school to the front steps and added seven framed photos of the victims.

A string quintet then performed in the first of a series of concerts school officials say will occur at noon through April 30.

Lucas Garcia, 33, who teaches English as a second language at the school, later read a statement.

“This tragedy has profoundly touched all of us, students, families, teachers, staff and administration,” Garcia said. “This is obviously a very challenging moment for our young and growing institution. We have only just begun to fully take stock of the situation.”

Students were being allowed back on campus, but classes won’t resume for several weeks, Acting Vice President Namsoo Woo said.

Several students were escorted by police into the school on Thursday to retrieve belongings. It was their first time in the school since Monday.

Dechen Yangdon, 27, waited nervously before two investigators took her inside. She is being hailed as a hero for intuitively locking a classroom door and turning off the lights after hearing gunshots. The shooter tried kicking in the door then fired at it. No students were injured.

Investigators who walked Yangdon inside the school shook her hand and praised her.

Asked what it was like being back inside the school, Yangdon gave a blank stare, bowed her head, grabbed her husband’s hand and quickly walked away.