Earth Hour: No lights, too, at world landmarks | Global News

Earth Hour: No lights, too, at world landmarks 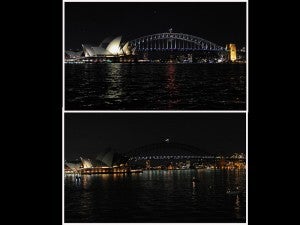 The Sydney Opera House and the Sydney Harbour Bridge are illuminated (above) shortly before the start of the 6th annual Earth Hour on Saturday. AFP

Hundreds of world landmarks from Berlin’s Brandenburg Gate to the Great Wall of China went dark on Saturday, part of a global effort to highlight climate change.

The number of countries and territories that participated in Earth Hour grew from 135 last year to 147 this year, said WWF, the global environmental group which organizes the event.

Libya, Algeria, Bhutan and French Guinea are among those participating for the first time.

Earth Hour, held on the last Saturday of March every year, began as a Sydney-only event in 2007. The city’s iconic Harbor Bridge and Opera House were dimmed again this year.

Australia is among the first countries to flick off the light switches each year; in New Zealand, Sky Tower in Auckland and the parliament buildings in Wellington switched off two hours earlier; Tokyo Tower was also dimmed and in Hong Kong, buildings along Victoria Harbor also went dark. All the events took place at 8:30 p.m. local time.

“Global warming is a big issue,” said Rudy Ko of Taiwanese environmental group Society of Wilderness. “Everybody can help reduce the problem by turning the lights off.”

Ko said children should invite their parents “to turn the lights off, go out, go to the parks to do some exercise, and enjoy some family time instead of watching TV or play video games.”

In Europe, 5,000 candles were lit in the form of a globe in front of Berlin’s Brandenburg Gate before city officials switched off the monument’s lighting.

More than 230 monuments and major gathering points in Paris were expected to dim lights for an hour—including Notre Dame Cathedral, the Arc de Triomphe, as well as fountains and bridges over the Seine.

An exception: The Eiffel Tower, which the mayor’s office said would go dark for only five minutes “for security reasons.”

Big Ben, Buckingham Palace, Tower Bridge and St. Paul’s Cathedral were among the other London landmarks to go dark.

Managers at the Savoy hotel planned to light the lobby, bars and restaurants with candles.

“Let us stand together to make of our world a sustainable source for our future as humanity on this planet,” the Nelson Mandela Center of Memory said in a tweet.

Across the Nordic nations, government buildings and municipalities joined in, including Stockholm’s royal castle and the Swedish capital’s huge globe-shaped sports arena. In Sweden’s second-largest city, Goteborg, the main boulevard was bathed in an hour’s darkness.