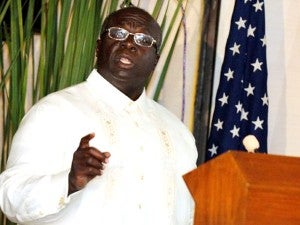 On November 11 last year, US Ambassador to the Philippines Harry Thomas Jr. cited the “unparalleled service and sacrifice” of both American and Philippine war veterans.

NEW YORK—United States Ambassador to the Philippines Harry K. Thomas, Jr. reiterated what he said in a recent forum with Filipino-American students in San Francisco: “As they say, it’s more fun in the Philippines!”

He made the statement during a town hall meeting sponsored by the U.S. Pinoys for Good Governance and the National Federation of Filipino American Associations (NaFFAA Region 1) held Tuesday, March 20 at the Kalayaan Hall of the Philippine Center.

The ambassador, in a free-flowing chat with community leaders, talked about how his “Filipino-sized” family members (his father is one of 10 siblings, his mother one of eight) have been visiting him in the Philippines and how they have been enjoying the country as tourists.

“I make them eat the best Filipino dishes and drink lambanog and San Miguel Beer,” he said.

In the same breath, the ambassador also talked about the rising number of men who visit the Philippines for sex, Americans included.

Last year, Mr. Thomas got embroiled in a controversy when he was quoted that 40 percent of men who travel to the Philippines go there for sex. He later apologized for his remarks.

During Tuesday’s town hall meeting, he said that the issue of sex tourism is something that needs to be looked at seriously.

“The numbers didn’t come from me. It came from ECPAT, from Visayan Forum. They say it’s between 40 percent to 62 percent. People are afraid to speak up. But when you go to Malate and Ermita, you see it, you know it is true,” he said.

According to an ECPAT (End Child Prostitution, Child Pornography and Trafficking of Children for Sexual Purposes) report citing UNICEF, the Philippines ranks fourth in the world in terms of countries with the highest number of prostituted children (behind Thailand, Indonesia and Malaysia). The Philippines’ Department of Social Welfare and Development estimates that there are up to 200,000 on the streets of Manila, and that at least one tenth are victims of trafficking.

“Everyone of those children deserve the same opportunity as our own children. Let’s get past the emotions and look at this challenge seriously,” Thomas added.

He also mentioned that the Federal Bureau of Investigation is working with Filipino authorities in order to curb the issue.

“Taking advantage of these poor children is a crime against humanity. There are Americans who go to the Philippines and get children to have sex with them. They record it on their laptops and some upload it online. It definitely exists, do we just ignore it? It must be stopped,” he said.

For community leader Loida Nicolas Lewis, the issue boils down to local governance.

“It is up to the mayor or barangay captain or the local officials to make sure that the children and young girls are safe in their neighborhood. The responsibility should be there, they should be vigilant,” she said.