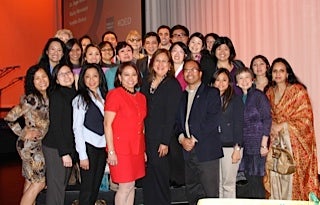 SAN FRANCISCO—Four outstanding women leaders in the greater San Francisco Bay Area were honored by highly respected KQED Public TV 9 and Public Radio 88.5 FM in celebration of Women’s History Month. Among them was Marily Mondejar, president of Filipina Women’s Network, a non-profit organization for women in the United States. FWN’s mission is to advance Filipino women in all sectors of society such as government, corporate or non- profit; contribute to the decisions being made in the political world, and raise awareness of their contribution to the building of America.

Mondejar ended her career as advisor in 2006 to devote full-time to her newly formed group. Her priority was to support programs against domestic violence, to break the silence and shame women/men, and to provide assistance. Under her leadership FWN has staged over 20 productions of Vagina Monologues by Eve Ensler. They’ve raised over $100,000 to help women and shelters. FWN has formed coalitions with other agencies such as Asia Women’s Shelter, Domenstic Violence Consortium and others. They’ve also published an anti-violence resource guide – where to get restraining order, where to seek help and where to find shelter for themselves and their children.  http://www.ffwn.org/vdayfwn.

Recently, San Francisco Mayor Ed Lee appointed Mondejar to the San Francisco Redistricting Task Force that will redraw the boundaries for San Francisco’s 11 supervisors’ districts, whose impact will be in effect for the next 10 years. And true to her mission to get Filipina women involved in government, Mondejar has filed papers to run for the San Francisco Democratic County Central Committee representing the Assembly District 17 (the Eastside of San Francisco).

The three other women honored together with Mondejar were Rhodessa Jones, Co-Artistic Director, Cultural Odyssey and Artistic Director of Medea Project: Theater for Incarcerated Women; Dr. Ray Mitchell, Chief Social Entrepreneur, The New Reality Foundation; Founder of G.U.R.L.S. Rock Leadership Program- these organizations she founded created programs to meet the needs of girls to excel as global leaders and to negate the negative impact of race and gender stereotypes in media and entertainment; Kemba Shakur, Founder and Director of Urban Releaf, an environmental nonprofit responsible for the planting and caring of an estimated 15,000 trees in low-income East Bay communities. Her program not only created a beautiful community but involved residents to take pride in their neighborhood. It also offered opportunities for at-risk juveniles and unemployed adults to gain marketable skills.