Swiss still not up to international tax standards—OECD 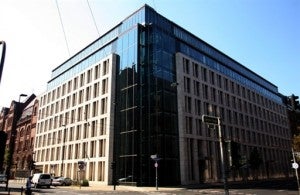 The office of Swiss bank Credit Suisse is pictured on July 14, 2010 in Duesseldorf, western Germany. Authorities raided Credit Suisse bank branches across Germany on suspicion they helped rich account-holders hide money from the taxman, part of a probe that has angered Switzerland. AFP File Photo

PARIS—Switzerland is still not up to international standards on combatting tax evasion but is determined to enforce new rules adopted in the fallout from the global financial crisis, the OECD said on Wednesday.

The Philippines, meanwhile, was judged to have made progress but also still had to do more, the Global Forum on Transparency and Information Exchange for Tax Purposes said.

The Forum, set up under the auspices of the Paris-based Organization for Economic Cooperation and Development, welcomed Switzerland’s rapid progress in meeting the new norms.

At the same time, the Forum, meeting in Bermuda, noted that recent tax information agreements agreed by Switzerland do not fully comply with the regulations.

In 2009, at the height of the global financial crisis sparked by the collapse of US investment bank Lehman Brothers, Switzerland was singled out with several other tax havens for its tradition of bank secrecy and lack of transparency.

Secret flows of money, as well as cheating the taxman, were also seen as destabilizing and having contributed to the crisis, sparking calls for radical reform, chiefly involving full transparency and information sharing.

As a result, Switzerland was put on an OECD list of countries failing to meet standards for full disclosure and required to become more open which it has since done by negotiating a series of information exchange accords with its partners.

The Forum noted, however, that requests for tax information from Switzerland must be made in great detail, with identities established, rendering a cooperative exchange more difficult.

Switzerland has agreed to modify its response to information requests but will have to do more if it is to be cleared and go on to the next evaluation phase in the second half of 2012, it said.

The Forum examined some 35 countries, finding that France, Italy, New Zealand and the United States generally met standards but Paris, Rome and Washington could be quicker in responding to information requests.

The Philippines and Singapore, who were also targetted initially, were judged to have made progress but also still had to do more, the Forum found.

The Forum meanwhile announced the coming into force of a new convention on tax evasion which OECD Secretary-General Angel Gurria urged all countries to adopt.

“The updated convention, which incorporates internationally agreed standards for exchange of information in tax matters, is the most comprehensive multilateral instrument available for tax co-operation,” the OECD said in a statement.