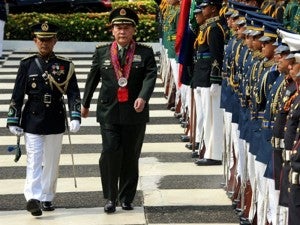 MANILA, Philippines – China on Thursday denied Philippine allegations that its ships intruded into a Manila-claimed area of the South China Sea’s disputed Spratly Islands to construct new structures and fortify its claim in the potentially oil-rich region.

Philippine officials said Wednesday that they have summoned a Chinese diplomat in Manila to protest and seek an explanation for the recent Chinese construction activities at a reef that were monitored by Manila’s military.

The disputed Spratlys, which are believed to be atop vast oil and gas reserves, have long been feared as a potential flashpoint of armed conflicts in Asia. The islands, which are claimed by China, the Philippines, Brunei, Malaysia, Taiwan and Vietnam, straddle some of the world’s busiest commercial sealanes.

The Philippine military has reported that a Chinese surveillance vessel and navy ships were seen unloading building materials and erecting posts in the vicinity of Iroquois Reef and Amy Douglas Bank – an uninhabited undersea hill claimed by the Philippines about 125 miles (230 kilometers) from southwestern Palawan province.

It is part of the Spratlys but well within the Philippines’ 200-mile exclusive economic zone, the Philippine Foreign Affairs Department said Wednesday.

The Chinese Embassy in Manila, however, said in a brief statement that “the reported ‘incursion of Chinese ships’ is not true” but acknowledged the presence there of a Chinese marine research ship “conducting normal maritime research activities in the South China Sea.”

Foreign Secretary Alberto del Rosario said any new construction by China in the area “was a clear violation” of a 2002 accord that China signed with the Association of Southeast Asian Nations, which includes the Philippines. It calls for countries to exercise restraint and stop occupying new areas n the disputed waters.

Chinese Charge d’Affaires Bai Tian was summoned Tuesday for talks in which Philippine officials conveyed “serious concerns” over China’s recent actions and sought clarification of them, the Foreign Affairs Department said in a statement.

Two Philippine foreign affairs officials told reporters Thursday that local authorities have monitored about six aggressive acts of China in the Spratlys that have raised worries that Beijing may be embarking to fortify its territorial claims by constructing new structures on barren offshore areas.

Those acts included the reported firing last February by a suspected Chinese naval vessel to scare away Filipino fishermen from the Jackson Atoll a Spratlys area claimed by Manila, said the officials, who spoke anonymously because of the sensitivity of the subject.

Chinese media have reported that Beijing plans to install an advanced oil rig in the South China Sea in July. The Philippines expressed concern and asked China’s embassy last week about the exact location of the planned oil rig and said that it should not be placed in Philippine waters.

Read Next
Rizal at 150 and our heroes who never made it to 40
EDITORS' PICK
We Can’t Guarantee You’ll Win a P20 Billion Jackpot, But We Can Help You Try
Sex on the menu for Pogo workers
SM continues to send relief assistance to remote towns in Batangas
First female commodore named
Foreigners prepare to flee as China virus toll tops 100
Best Gift Ideas in the Philippines
MOST READ
Virus outbreak death toll in mainland China rises to 132, cases increase to 5,974
Sex on the menu for Pogo workers
Palace urged to ban Chinese from Wuhan, nCoV-affected cities
Taguig Artists spend 18 hours painting mural to honor Bryant, daughter
Don't miss out on the latest news and information.