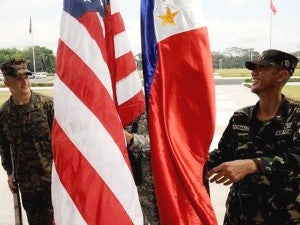 US (L) and Philippine (R) flags are prepared for the opening rites of the 2011 Philippine-US Balikatan Exercises at a military camp in Manila. AFP FILE PHOTO

President Benigno Aquino III said on Wednesday more US troops would be welcome to rotate through the country, but ruled out permanent bases.

Mr.  Aquino told Agence France Presse in an interview that talks were under way for the longtime allies to hold more military training exercises in the Philippines, as well as increase the number of times that US navy ships visited.

“We are talking with them. We will have more of the same, is what I am trying to say,” Mr. Aquino said, referring to a longstanding partnership that sees regular joint exercises and US port calls in the Philippines.

“Their ships can come and call on us, can be replenished, but our Constitution will not allow any permanent berthing here in any form.

“There might be increases in terms of personnel, but it will have to be very clear on when they come in and go out. They cannot be here permanently.”

The negotiations come while the United States is expanding its military presence in the Asia Pacific as a counterweight to rising China, having brokered a deal last year with Australia to place more troops there.

It is also expecting to station several combat ships in Singapore and step up deployments in Thailand, the chief of US naval operations, Admiral Jonathan Greenert, wrote in December.

Mr. Aquino said the Philippines was also looking to the United States for help in building up its defense capabilities, amid a maritime territorial dispute with China that flared last year and a host of other security issues.

The Philippines had asked the United States for F-16 fighter jets, as well as patrol vessels, transport aircraft and radar systems, according to the President.

“They are still studying the request for the excess F-16s. We are hoping they will look at it favorably,” he said.

Mr.  Aquino said fighter jets were a top priority for the Philippines, which has one of the most poorly-equipped militaries in the region, because the country has none.

“From nothing to one is a significant leap. I am told we can sustain two squadrons (24 aircraft).”  Aquino emphasized there were many reasons the Philippines needed to increase its military capabilities, including combating terrorism, helping deal with natural disasters and evacuating Filipinos from crises overseas.

But he also talked in depth about the Philippines needing to protect its rights to parts of the South China Sea that are within its 200-nautical-mile exclusive economic zone and are believed to sit atop vast oil and gas deposits.

China and Taiwan also claim those areas as theirs, even though the contested waters are much closer to Philippine landmass than Chinese.

Diplomatic tensions escalated last year when the Philippines accused China of harassing a Philippine-chartered oil exploration vessel in one of the disputed areas called Reed Bank, and of other bullying tactics.

Philippine concerns about China’s perceived aggressiveness prompted it to seek help from the United States in building up its maritime defense capabilities. AFP