Millions of Filipinos get ready to participate in Earth Hour campaign 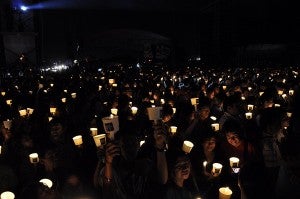 Filipinos participate in an Earth Hour campaign. PHOTO FROM WWF.ORG.PH

MANILA, Philippines—Lights are set to go out again on the evening of March 31 this year, as millions of Filipinos are expected to participate in the Earth Hour campaign, a self-imposed 60-minute blackout now deemed to be the largest call for action on climate change.

Now in its fifth year, Earth Hour Philippines national director Gia Ibay said in a briefing Wednesday that the group expects the Philippines to again lead the world in the switch-off ceremonies, and surpass previous records in terms of participation and energy savings.

The Philippines is a three-time Earth Hour champion and an official Earth Hour ‘Hero Country.’

According to the World Wide Fund for Nature (WWF), the Philippines became the top Earth Hour country starting in 2009, in terms of town and city participation, as 647 Philippine towns and cities joined.

Ten million Filipinos saved at least 611 megawatt hours (MWh) of electricity in 2009, equivalent to a temporary shutdown of a dozen coal-fired power plants.

In 2010, 1,076 Philippine towns and cities participated, more than enough to retain the title, while last year, a record-breaking 1,661 Philippine cities and municipalities switched off their lights for Earth Hour, generating savings of about 500 megawatts.

“We’re extremely excited for this year’s switch-off ceremonies. Though the Visayas and Mindanao have always observed their own unique switch-off ceremonies, WWF has traditionally celebrated Earth Hour from Manila. To commemorate our country’s fifth Earth Hour, we thought it high time for WWF to observe the movement across the archipelago,” Ibay said.

The switch-off ceremonies will be held in Makati, Cebu and Davao.

“More than anything, Earth Hour is a celebration of hope. When our planet plunges into darkness, we can look to the stars and dream of what can be. When the lights switch back on though, our real work begins.” Ibay added.