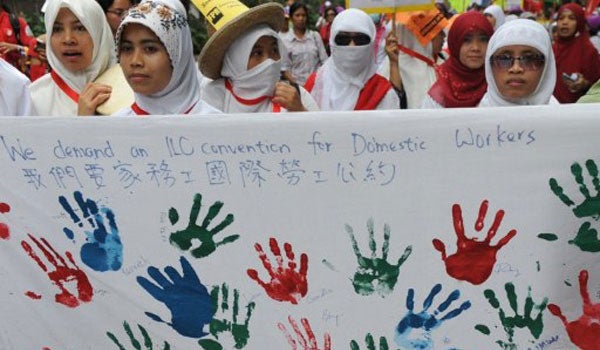 Foreign domestic helpers from Southeast Asian nations such as the Philippines and Indonesia join local residents as they march through the streets of Hong Kong to protest over soaring rent and food prices in the southern Chinese city. AFP File Photo

MANILA, Philippines—Over 100,000 Filipino domestic workers in Hong Kong are set to get HK$160 (about P887) more in pay after the Chinese territory’s Cabinet approved on Wednesday an increase in their minimum allowable wage (MAW).

Aside from the $160 additional wage, the Hong Kong Executive Council or Cabinet also announced a $25-increase in the food allowance for migrant maids and nannies—officially known in Hong Kong as foreign domestic workers (FDWs).

However, the Asian Migrants Coordinating Body-HK, which includes overseas Filipino groups, expressed discontent with the raise, saying the new MAW was still lower compared with the $3,860 (about P21,400) in 1998.

“It is still not enough. We shall continue to campaign for a significant wage increase and against the seriously flawed process of determining the Minimum Allowable Wage,” Dolores Balladares, spokesperson of the group, said in a statement from Hong Kong.

“The truth is we still do not have a wage increase since the 1998 MAW level of HK$3,860. The current MAW at HK$3,740 is even way below that amount. Counting in inflation and the increase in prices of commodities and services in Hong Kong, the new wage will still not be able to meet the needs of FDWs to live decently,” she said.

Eni Lestari, an Indonesian and another spokesperson of the group, said they were hoping that the annual MAW review being done by the labor department would consider the plight of some 285,000 Asian domestics, including more than 100,000 Filipinos, whose families have been suffering from dire economic times back home.

“The annual inflation has already eroded our wage and the increase in prices of commodities that we buy and services that we use has made it impossible for us to make ends meet. The economic recovery of Hong Kong has not yet benefited domestics and a $4,000 MAW only actually means a HK$140 hike from our $3,860 monthly wage 13 years ago,” Lestari explained.

Lestari also belied claims that employers would not be able to afford a $4,000 monthly wage saying that even during the time of crisis in 2003, employers were paying $3,670 already. With the wage increases of regular workers in the past years, Lestari said that $4,000 would be within the capacity of Hong Kong employers.

The AMCB also expressed disappointment with how the government came to the decision.

Balladares said that in the dialogue with the Hong Kong Labor Department in the first week of May, she said the AMCB was told that the MAW would be discussed only during that period and that the announcement would be made in August.

“They did not even give time for FDWs to make a case for our demand. This just showed that the MAW process is an unjust, arbitrary and untransparent process that is there not to protect the interests of migrant workers but to keep FDWs as one of the lowest-paid workers in Hong Kong,” she remarked.

On Wednesday morning, the AMCB officially submitted its petition for a HK$4,000 minimum monthly wage.

Balladares announced that they will pursue their advocacy actions for a significant wage increase.

“The recovery of the Hong Kong economy must include the recovery of the economic capacity of those in the bottom. This new decision on the MAW is not a relief for FDWs but a pittance that keeps us in a desperate need to survive,” she said.