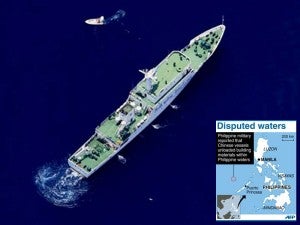 A Chinese salvage and research ship is shown anchored in disputed South China Sea waters near the island of Palawan. AFP/DFA

MANILA, Philippines—(UPDATE) The Department of Foreign Affairs has summoned a Chinese diplomat to protest what it says is the latest instance of China’s construction activities in the disputed South China Sea.

Foreign Affairs Secretary Alberto del Rosario said Wednesday that any new construction by China in waters that are also claimed by the Philippines is a clear violation of a 2002 accord that calls for countries to exercise restraint.

The Philippine military has reported that Chinese ships were seen unloading building materials and erecting posts in the vicinity of the Spratly islands’ Iroquois Bank, which is 125 miles (200 kilometers) from southwestern Palawan province. 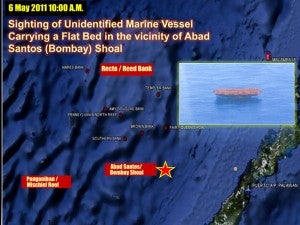 The summons followed a meeting held last Friday, where the DFA also expressed its concern to the Chinese Embassy over reports in Chinese state media about China’s planned installation of its most advanced oil rig in the South China Sea next month.

During this meeting, the DFA asked the Chinese Embassy for the exact planned location of the mega oil rig and stressed that it should not be placed within the claimed territory of the Philippine.

In both meetings, the Philippines and China reiterated their commitment to maintaining peace and stability in the area, and to work together to maintain good bilateral relations, the DFA said.

The Philippines recognizes that critical to the peace and stability of the West Philippine Sea is the full and faithful implementation of the ASEAN-China DOC on the South China Sea, it said. 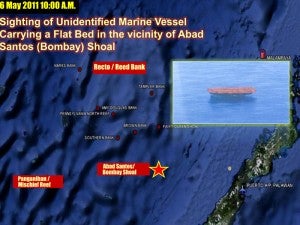 The Philippines also believes that it is in the best interest of all claimant countries and the region to transform the area into a Zone of Peace, Freedom, Friendship and Cooperation through sustained consultations and dialogue, the DFA sad.